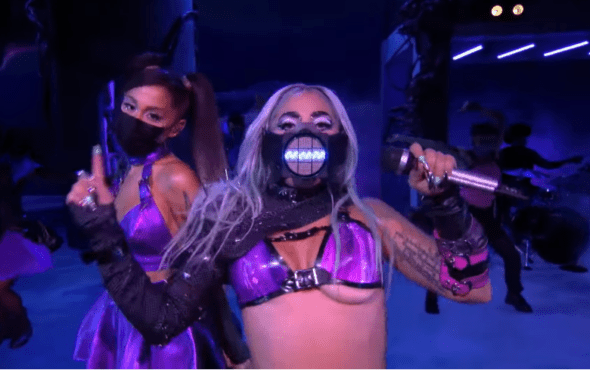 Lady Gaga and Ariana Grande’s collaboration Rain On Me was iconic. The music video was iconic. And if you’ve been following the past two sentences, you might be able to guess how we’re about to describe this VMAs performance, but just for clarity’s sake, it’s ICONIC!

The legendary, see we can change adjectives, song was up for seven awards, and it scooped up three of them winning Song of the Year, Best Collaboration and Best Cinematography, and on top of that Gaga herself scooped up the Artist of the Year and was the first recipient of the MTV Tricon Award.

In a heartwarming acceptance speech, Gaga spoke about her past failures as an actress and the setting up of the Born This Way Foundation.

She added: “I know a renaissance is coming, and the wrath of pop culture will inspire you and the rage of art will empower you as it responds to hardship with its generosity and love.”

But it was her performance at the VMAs that caught all attention.

Starting the most Gaga way possible: the artist in a LED face mask covering half her face, with a Chromatica throw blanket, stripper pole and a whole lot of naked mannequins, she launched into the performance that has literally ended all performances.

What starts with a small video featuring Britney Spears, *NSYNC and Diana Ross, Gaga quickly ditches before heading to the stage and launching into 911.

This is then swiftly followed by an incredible outfit change and Rain On Me, with Ariana Grande appearing halfway through in the black face mask that we’ve all become accustomed to on our shopping trips.

After a quick adjustment to her face mask, Grande and Gaga depart, and when Gaga returns she’s done another iconic outfit change, this time to a sparkly body suit that we want hanging up at our offices, before going to sit at her brain piano (not an autocorrect issue, we mean brain piano) and finishing with Stupid Love.

She then called on those watching to love themselves “tonight and every night” to celebrate and love who they are, be kind, and mask up.

And don’t worry about picking up our wigs from the floor, we’re just going to watch this performance again, and it’ll come flying right back off.

Watch below, or here, if you don’t believe us.