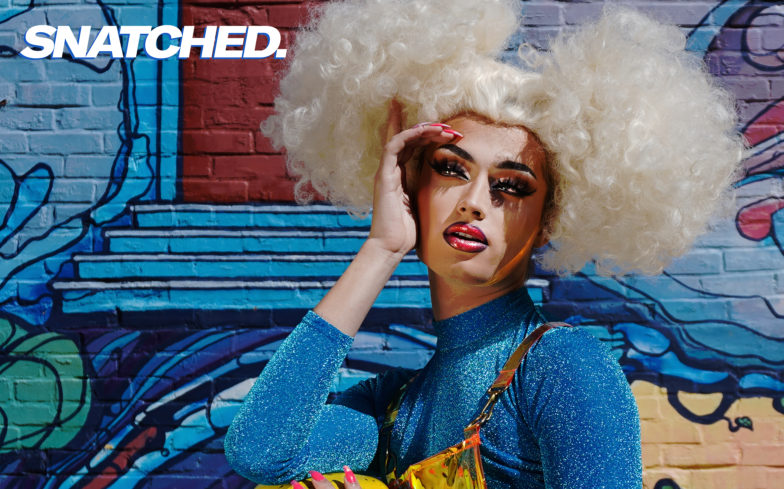 If you’ve haven’t heard of Lady Boi, then you need to get into all this queen honey!

The self-made performer – who hails from Missouri – “may be a pretty face” (her words) but don’t get it twisted… she can entertain.

“I love to teleport a club into my own twisted world, so be prepared to dive head first into my fantasy!” she tells us.

“No matter the theme or venue, my shows always feature beautiful inspired queer artists striving to push the bounds of gender and social norms.” Sign us up on the guest-list, pronto.

We had a chat with the sickening entertainter about her complicated relationship with her family, the divide between Drag Race queens and “local queens” in the club scene, and whether she’ll ever appear on the Emmy Award winning series.

Spoiler alert: it’s a no.

How did you get into drag?
I first started drag in the chaos of my junior year of high school. I had just moved out at 17 and had already moved three times in three months across multiple states. I made a deal with myself to finish high school no matter what the struggle, and discovering drag gave me the inner stability to do so. Granted, I skipped most Friday’s of my senior year due to late running Thursday night shows every week. The art taught me the confidence and power it took to control my new life, while providing an escape from some of the harsh realities of living in small town Missouri. How would you describe your style?
Before any aesthetics, I take pride in my style being self-made and authentic. No matter the look, whether worked from raw materials, or a simple alter and embellishment, my look must always have my opinion. She’s a crafty queen – she can make a garment, style a wig, beat a mug and serve!

Who are your main drag inspirations?
My drag is a weird concoction of obscure cultural references derived from a very sheltered childhood. But my main inspiration for drag and life is Willam Belli. Since secretly watching her media in the AM of my closeted teen days, she continues to teach me new lessons in life, love, confidence and creativity. Who has changed your life?
I’m going to say God, but not in the way you expect. I’m a spiritual person, not a religious one, but Christianity played a monstrous role in the majority of my life. Growing up secretly gay in my household, I always knew my blood family would pick their beliefs over their “flesh and blood.” Warring internally my entire life before coming out, I was constantly forced to dissect and rationalise my own beliefs, to think beyond blind acceptance and the norm to develop my own opinions early on. The oppression of their “God” couldn’t save me, but it sure did create one damn smart queen!

Your family is quite religious – how did they take you becoming a drag queen?
Religious is an understatement. Most of my family cut me off way before I started doing drag. The closest thing I’ve got to supportive blood family would be a very complicated relationship with my younger brother, who is also gay and a drag queen. How did the lack of support from your parents affect you and your brother?
Being the oldest of five, coming out had so many pressures beyond religious judgement. I came out at 15, but was kept in my home until I was 17 and able to move out in complete secret to my siblings, family, everyone. My brother kept silent until he was 17 himself a year later, in fear of what he saw me endure. Even though we’re both living our adult lives in the real world, there’s definitely a very bizarre disconnect in our perception of family.

Have you formed a drag family since discovering the art-form?
Less in the traditional sense of drag mothers and daughters, but drag has led me to every city, club, and person I’ve experienced in this new life. I consider them my chosen family. There seems to be a divide with how Drag Race queens and “local” queens are treated – has this been a problem for you?
I never started drag for the money or the fame, and I’m still not concerned at this moment. This “divide” is fought over booking fees and Instagram followers, where if more girls focused on creating and enjoying their art, the drag community would be having much more fun.

Is Drag Race something you’d like to pursue in the future?
I respect Drag Race and its incredible contribution to advancing drag in mainstream media, but I do not plan on auditioning. What can fans expect if they come to a Lady Boi show?
Don’t be fooled, she may be a pretty face – but the queen can entertain! I love to teleport a club into my own twisted world, so be prepared to dive head first into my fantasy! No matter the theme or venue, my shows always feature beautiful inspired queer artists striving to push the bounds of gender and social norms.

Where do you see yourself in the next few years?
I’ve never planned more than six months ahead in my life. I fly by the seat of my pants and hope for the best. But I know I’ll always be creating, partying, and smoking a blunt!