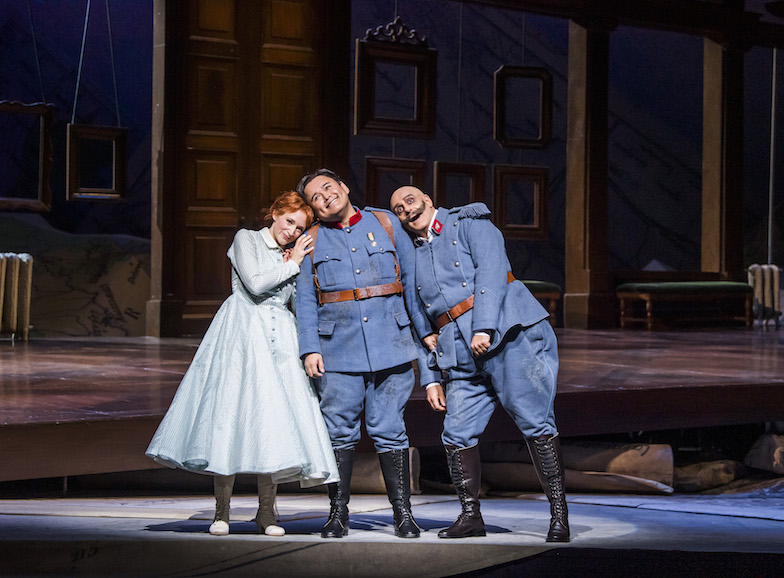 The Royal Opera House is the setting for this staging of Donizetti’s two-act opera, directed by Laurent Pelly.

La Fille du Régiment tells the story of Marie, a young girl abandoned on a battlefield by her family who has been rescued and raised by the 21st army regiment. Her foster-father Sulpice decrees that she should only marry a man from the regiment, as a token of gratitude for being saved by them – which complicates matters when she falls for the Tyrolean Tonio. Upon learning Marie’s fate, Tonio enlists in the 21st regiment in a bid to win her heart.

We’re aware that the idea of a night at the opera may not appeal to everyone, but this is an entertaining and lighthearted revival of Donizetto’s comic piece. With a delightfully camp sense of humour this feels a bit more like a high-budget pantomime than a serious piece of theatre, but it’s all the more enjoyable and accessible as a result.

There are a number of highlights. We particularly enjoyed the choreographed routine at the opening of act two, which saw four cleaners rotating around a quartet of spaces and poses in a vast room set within a grand old house – and not really doing very much cleaning at all. Miranda Richardson, in a cameo spoken role, was an amusing presence for her limited time on stage – delivering one of her lines in English to entertaining effect.

Unsurprisingly for a Royal Opera House production, the quality of the musicianship is exceptional and the talented cast put in commendable performances. Most notably, Mexican tenor Javier Camarena absolutely raises the roof as Tonio, his top Cs eliciting screams for an encore from the adoring audience midway through act one. The leading duo are not quite a balanced pairing – Sabine Devieilhe’s soprano seems a little on the small side in comparison – but she more than makes up for this by delivering an endearing acting performance.

We were really quite taken with La Fille du Régiment. It all looks and sounds lovely, and while the plot may be a little on the thin side, this high-camp revival is entertaining enough to fill a couple of hours. The opera is all about the music, of course, and while a number of the performances are impressive, Camarena’s outstanding Tonio is arguably worth the admission price alone.