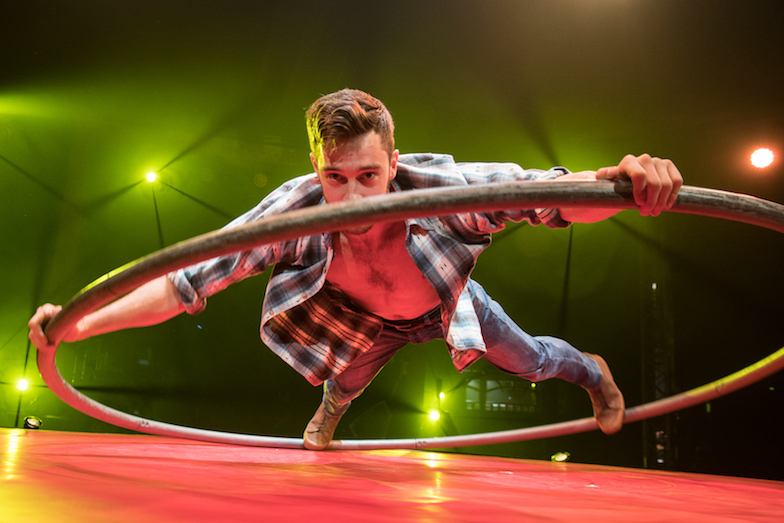 15 years after debuting at the Edinburgh Fringe, and a decade on from scooping an Olivier Award for its first London run, La Clique returns to the West End at the Leicester Square Spiegeltent.

We’ve seen a lot of cabaret and circus over the years – in fact, just a few months ago we caught another cabaret show, Little Death Club, at the Spiegeltent on the Southbank, which was hosted by Bernie Dieter, compere of La Clique. We had some concerns that this may just be more of the same; that we may have seen everything here done before, and possibly better. La Clique allayed our doubts with a very slick and well-executed show, carefully curated so that no act outstayed their welcome. Two hours may seem a long time for a performance of this nature, but trust us – it absolutely flies by.

Bernie Dieter hosts in her trademark style – putting on a self-indulgent and over-the-top performance, she is a camp, kitsch throwback to the Weimar Republic days. We recognised a couple of her songs from having seen her previously, but it’s testament to the quality of them that we still found them hilariously funny the second time around. Of course the inclusion of audience interaction in her routine adds an amusing layer of unpredictability to proceedings. Those in the first couple of rows, beware – not only is Bernie likely to pick on you, but there’s a fair chance of getting very wet, too (more on that to follow).

As is often the case when a cabaret show has a long run, the lineup may vary slightly from show to show. Our performers didn’t match exactly those billed in the programme, but an insert advised us that we would be treated to Stephen Williams, billed as “the famous bath boy”, on press night. His routine was perfectly entertaining – a display of aerial strength and dance – and while we’ve seen similar acts before, the addition of the water and a cheeky bit of playful humour helped liven things up. Those sat near the front should be warned that the splash zone extends to at least the first three rows.

La Clique is a show with a number of highlights. Florian Brooks is an early one – we’ve seen more juggling acts than we care to remember, but this imaginative routine involves all the component parts of a champagne drinks service, throwing in some impressive balancing feats, too. Heather Holliday’s two routines really stayed with us, too – the first a stomach-turning sequence involving swallowing swords of different shapes and sizes, the second a dangerous-looking fire eating and breathing performance. David Pereira also impressed, and while we don’t want to share any spoilers, now would be an opportune moment to warn that La Clique does feature its fair share of nudity.

There’s much in La Clique to enjoy. Not every routine grabbed us – there were a couple of by-the-numbers displays – but many of the performers put a fresh twist on established cabaret favourites. It’s held together by Bernie Dieter’s entertaining and unique style as host, and proceedings are propelled along with some great live music from the talented band. It all comes together to deliver what is, for the most part, an enthralling cabaret experience