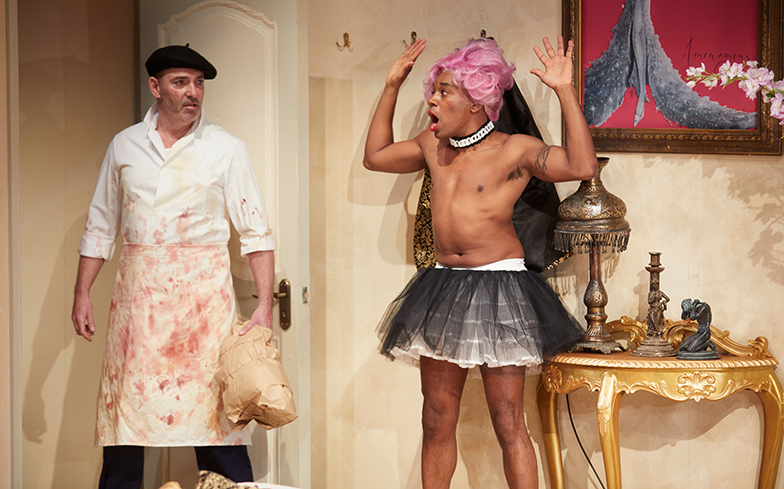 Something to make very clear from the off is that this is very much the play, and not the musical, of La Cage aux Folles – those looking for Jerry Harman’s and Harvey Fierstein’s version in the hope of hearing gay anthem I Am What I Am won’t find it here. Instead we have a new English-language adaptation of the 1973 French farce on which that musical was based, but no need to worry – this is still a great fun show.

Central to the story are Georges (Michael Matus), a drag club owner in St Tropez, and his partner Albin (Paul Hunter), who is the star of the club’s show. Early in the play we meet Georges’ son Laurent (Arthur Hughes), who announces that he has proposed to Muriel (Georgina Ambrey) on a trip to Ireland and it’s now time for the two sets of parents to meet. Laurent has concerns that his fiancée’s parents – right-wing, conservative Christians – may not be all that welcoming of Georges’ and Albin’s more progressive and liberal values.

Frankly it’s all terrific fun. Act one takes a little time to warm up, but when it gets going it’s genuinely very funny – and act two, which ups the pace significantly, really soars. It’s a weird and wonderful production; surreal in places – clearly they were having a lot of fun with the butcher character – and it’s absolutely not afraid to break the fourth wall regularly. It frequently verges on the chaotic, but thankfully it’s packed full of witty punchlines and silly visual gags.

It does have some minor shortcomings. The source material is the best part of 50 years old, meaning some elements feel dated. The novelty of gay characters – particularly those in a happy, functional relationship – has, thankfully, worn off over time. A handful of the punchlines are a bit tired and predictable, too. But for the most part it really succeeds – La Cage aux Folles delivers a show which is frequently funny, occasionally hilarious, and overall a really enjoyable night out.