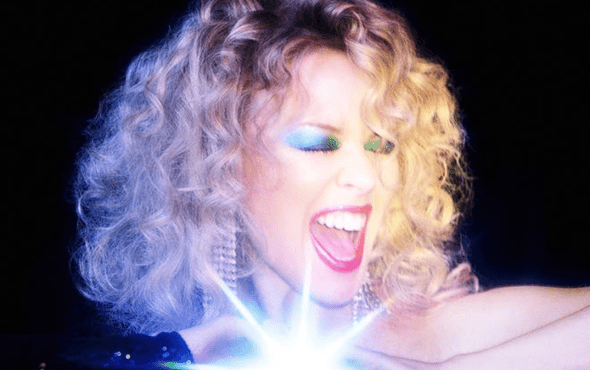 Kylie Minogue is back with a bang(er).

The Aussie pop princess has returned to her disco and dance-pop roots with Say Something, written with longtime collaborators Biff Stannard, Ash Howes and Jon Green.

“It’s like this gigantic song and yet it’s very heartfelt at the same time. When you see the video it’s like a galactic disco,” Kylie said on BBC Radio 2. “This song is about all of our eternal quest for love and the searching and knowing that there’s something or someone out there that you can relate to and makes you a better person.”

The video was shot by Sophie Muller, who previously teamed up with Kylie for her Dancing, Stop Me From Falling and Golden visuals, and will premiere next month.

“It felt like the one to go with first,” she continued. “There’s a lot of room for emotion within [it], however you feel – whether you just want to shut you eyes and dance, or cry.”

Say Something is the first single from Kylie’s upcoming 15th studio album, DISCO, her first major release since 2018’s chart-topping, country-leaning Golden. According to Amazon, the deluxe edition will be 16 tracks long.

In a May interview with GQ, Kylie said the album will have a “grown-up disco” sound. “[It’s] difficult even for me to explain,” she said. “But even grown-ups need some pure pop fun.”

She discussed the genre’s recent revival with smash hits from Dua Lipa (Don’t Start Now), Doja Cat (Say So) and Lady Gaga (Rain On Me), saying: “It’s all cyclical, right?

“I loved disco as an eight-year-old, so it’s been a long love affair. I’m loving the modern interpretations of the genre now. There’s a lot of early 2000s love around at the moment. Both feel like good times for me, so I’m channelling that into this record.”

Kylie also revealed that she’s been recording new music from her living room during lockdown, telling PA: “I’ve been really busy, setting up a home studio (AKA, my lounge room!) and learning so much about remote recording.

“It’s been a steep learning curve for all the team as there are technical obstacles to navigate but I’m so thankful to be able to continue work on my album in this way. I’ve been riding the emotional wave along with the rest of the world, but creativity has been a big help.”

Say Something is now available on streaming services – listen here on Apple Music or below.