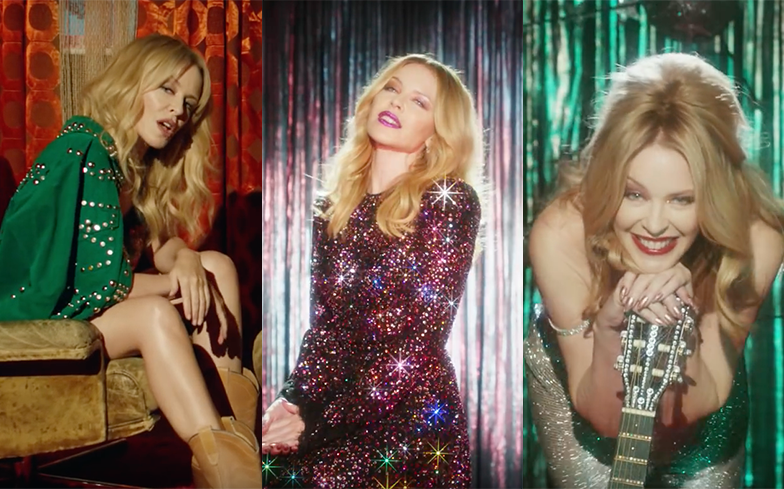 Pop music has been saved.

You need to stop everything you’re doing RIGHT NOW because Aussie pop goddess Kylie motherf**king Minogue has blessed us pop music fanatics with the music video for her country-pop banger Dancing.

In the video, Kylie channels her inner cowgirl as she dances with her team of (very attractive) day-of-the-dead painted dancers at a hoedown, serving multiple, glam outfits – hence the three-way photo in the header because HOW ON EARTH were we supposed to choose one? Look how fierce she looks…

We have a feeling fans will relate to the lyrics…

“No one wants to stay at home. Nobody wants to be alone. When you come knocking, I’ll be at your door,” she sings. “I don’t ever wanna stop, I’m gonna give it all I’ve got.”

And on the chorus, she belts: “When I go out, I wanna go out dancing!”

We can see this becoming a future Kylie classic because it’s catchy as f**k – and she looks sensational. Watch below.

Dancing is now available on iTunes and streaming services, and her long-awaited 14th studio album – Golden – is due for release on 06/04/18. You can pre-order the album here.

Last week, Kylie released the album cover and track listing for Golden, which is as follows:

Kylie also revealed that she will be touring again this year – fingers crossed she returns to her loyal fans in the UK!

Throughout her career, Kylie has sold over 80 million records. Oh, and she’s recognised as the highest-selling Australian artist of all time. Yas kween.