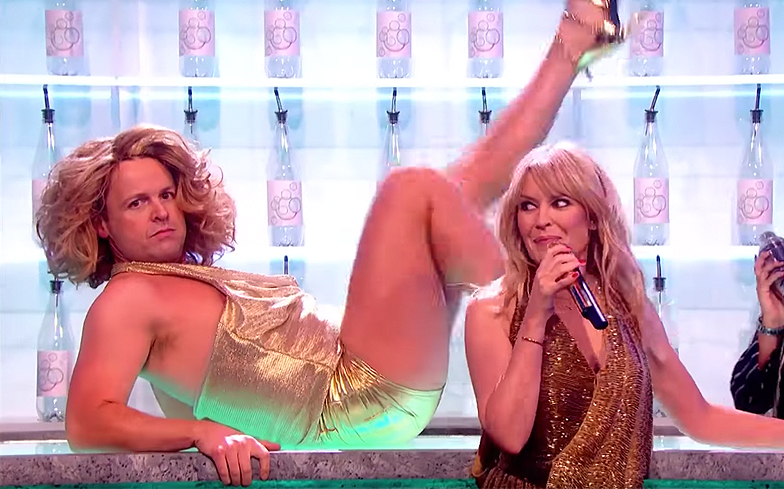 Kylie Minogue stopped by Ant & Dec’s Saturday Night Takeaway this weekend to perform her very good new single Dancing, but also found the time to whip out a few of her classic hits.

The Aussie superstar was joined by the cheeky hosting duo for renditions of Can’t Get You Out Of My Head, Spinning Around, I Should Be So Lucky, and The Locomotion, with a few surprises thrown in.

Those unexpected moments included Ant & Dec getting dolled up in some of Kylie’s iconic outfits, including her white hooded playsuit, and those infamous golden hot pants.

The whole thing became to absurd that at one point Kylie had to stop singing as she got the giggles, as you can see in the video above.

The End Of Show spectacular was to promote the star’s forthcoming headline tour of the UK.

Kylie’s new album Golden, due out 6 April, will be her first studio album featuring all new material since Kiss Me Once (2014), which gave us pop perfection with singles Into the Blue, Sexercize and I Was Gonna Cancel.

Watch the music video for Kylie’s Dancing below: