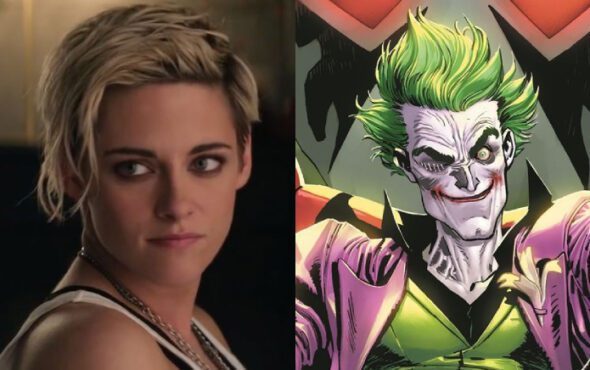 Kristen Stewart has opened up about the possibility of playing the Joker opposite Robert Pattinson’s Batman.

During an interview with Variety, the Twilight actress was asked if she would ever step into the iconic role.

“Let’s do something new. I love the energy behind that,” Stewart said.

“It’s really been done so well. I feel like, maybe, we don’t traipse over, but I love that gusto. Let’s figure something else out. I’m totally down to play a freaky, scary person.”

Before stepping into their own successful careers, Stewart and Pattinson starred in the extremely popular Twilight franchise.

Alongside their lead roles as Bella and Edward, the two were romantically involved for four years until their breakup in 2013.

Stewart isn’t the only one interested in her possible involvement in an upcoming Caped Crusader movie.

After DC dropped the highly-anticipated trailer for The Batman earlier this week, fans shared their excitement for the film’s expansive villain list.

The trailer also sparked speculation that the clown Prince of Crime would be making a surprise appearance.

“I love the energy behind that. It’s really been done so well. I feel like, maybe, we don’t traipse over, but I love that gusto. Let’s figure something else out. I’m totally down to play a freaky, scary person.” — Kristen Stewart on playing Joker in Batman. pic.twitter.com/hb85cEogdg

Social media users were quick to share their dream casting of the role with many setting their sights on Stewart.

One Twitter user wrote: “Kristen Stewart. No No No wait I’m serious think about her subdued nervous energy is perfect for an edgy grounded take on The Joker.”

Another user even suggested that Stewart also play a “butch” version of Poison Ivy.

“I want to see Kristen Stewart play the Joker and also maybe a butch Poison Ivy with Margot Robbie’s Harley Quinn, she can be two people, maybe even more,” they wrote.

Even though the likelihood of seeing Stewart take on the role is slim, there is plenty of source material to go off of for a female Joker.

In the legendary Flashpoint storyline, Bruce Wayne dies in the horrific alleyway attack that originally killed his parents.

Filled with grief, Martha Wayne goes down a mental spiral and becomes The Joker which results in Bruce’s dad, Thomas Wayne, becoming The Batman.

DC projects aside, Stewart is gearing up for a busy few months with the release of her new Princess Diana biopic, Spencer.

The upcoming film is based on the later years of the marriage of the Princess of Wales (Stewart) and Charles, Prince of Wales (Jack Farthing).

Over the last few weeks, the Charlie’s Angels star has received critical acclaim for her performance – with many considering her a frontrunner for next year’s award season.

Watch the trailer for Spencer here or below.