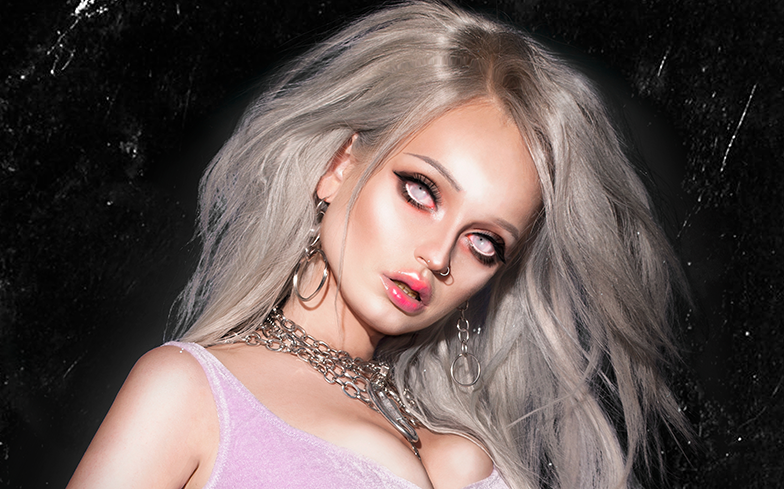 “I would definitely raid all of the designer stores and die happily in a pile of bags.”

German singer-songwriter Kim Petras has provided us gays with bop after motherfucking bop in the past two years, with singles such as I Don’t Want It At All, Heart to Break and All The Time solidifying her as a bonafide pop slayer.

Earlier this month, she released her Halloween-inspired EP, Turn Off The Light Vol. 1, an eight-track collection that sees Kim give her signature bubblegum hooks a spooky, industrial dark pop makeover. It’s one of our favourite releases this year and will be the perfect soundtrack for our annual seance!

In celebration of its release, we caught up with Kim and discussed all things Halloweeny: her zombie apocalypse survival plan, how she’d die in a horror movie, and Paimon, the breakout star of Hereditary and the highest ranking demon from hell. Enjoy!

Hi Kim! So, I’m obsessed with your EP.
Sick! Thanks. I’m glad you like it.

I especially love Turn Off the Light with Elvira, like, c’mon?
Yeah! I know. Elvira got on the EP pretty last minute, and we got her on it just before the deadline. I was all worked out because she was my first choice. I really wanted her and it kind of solidified it as a Halloween moment.

What inspired the Halloween EP?
Halloween’s my favourite holiday. I’m definitely a pumpkin spiced latte girl [laughs]. I love horror movies, I love creepy stuff. Earlier this year, me and my friend Jesse Saint John wrote Close Your Eyes, and it’s opened that door for creepy pop, and I was really obsessed with that song. I was like, ‘I wanna do a whole project that sounds like this.’ We then wrote this whole thing in like a week and a half, watched a bunch of horror movies… Hereditary had just come out, which is one of the best horror movies of the year and I wanted to make music that leaves me with that same kind of feeling. It all came really naturally and yeah, I’m happy to show a different side to myself. Everything I put out before was quite sugary and super-pop, which I love, it’s the reason I make music, but I want to always evolve.

It feels so fresh. Not many artists do Halloween EPs…
That’s freaking awesome. I always wanna explore new territory. I know that a bunch of people put out Christmas albums, so I was definitely like, ‘I wanna make a Halloween EP.’ I wanted to do it first, and own it!

Also, Hereditary scared the shit out of me.
It’s terrifying. It left me so entertained but so traumatised. It was beautiful too, I love that movie. My friends and I always chant “Paimon” everywhere. We’re like, “Paimon! Paimon! Paimon!” It’s like a drunk thing where we always chant his name.

How does one get the full Boo Bitch experience when listening to your EP?
Well, the way I like to listen to it, is probably smoke a drag [laughs]. Put some headphones on, and I have a star machine that projects little stars. The whole thing is meant to be top to bottom without skipping anything, because they’re all seamless and go into each other, and take you on a journey. Just let it play!

I feel I got the full experience earlier this week. I watched the new Halloween film and then played your EP as I walked home alone in the dark…
Oh my god I cannot wait to see it! How was it?

Brilliant. Jamie Lee Curtis kicks so much ass.
I love her so much. That’s awesome, that’s great to hear. This has been a great year for horror movies. But I can’t wait for that one, I saw the trailer and freaked out.

I’m gonna ask you some spooky questions now. You ready?
Lets do it.

Who would you say is your favourite classic monster, or horror movie villain?
Ooh. Hmm. There’s so many good villains. I love Maleficent, I love Chanel Oberlin in Scream Queens [laughs]. I love Freddy, he’s always a good one. Paimon in Hereditary! I’ve always wanted to play a villain. If I ever act, I want to play a villain. That’s the only way I’d ever act [laughs]. Charlize Theron in Monster, even though she’s not really a villain, but it’s such a brilliant portrayal. Which horror movie have you screamed at the loudest?
Well nothing for me will probably beat watching It as a kid, waking up, putting the VHS in at night, while my parents were asleep. I was just so terrified. So It, because I don’t really love clowns [laughs]. Then The Omen really terrified me as a kid. I watched The Exorcist for the first time about two, three years ago and it really blew me away. It holds up so well, it’s still so amazing and scary.

If you were in a horror movie, how would you die?
I’d probably just give up [laughs]. I’d be like, ‘Nah man, can’t do this.’ I would be dead. There’s so many amazing tricks that horror movie survivors have to figure out to survive, and I’d probably just die in the most stupid way ever. I’d probably go out like Paris Hilton in House of Wax, which is also a very iconic death! [laughs]

If it were a paranormal situation, I’d give up. But if it was a serial killer thing, I’d like to think I’d put up a fight.
Yeah, same. I’m just… the first to die. That would also be a very on brand moment, if I were part of a horror movie and was first to die. That’s one of my life goals.

If there was a zombie apocalypse tomorrow, what would your escape plan be?
I would definitely raid all of the designer stores, take all the bags I’ve always wanted and die happily in a pile of bags. I’d make it really iconic with a lot of designer shit.

What is the best Halloween costume you’ve ever done?
I did a pretty mean Sailor Moon one year. I made her dead.

What are you planning to dress up as this year?
I have a couple of Halloween shows in LA this year, and I feel like LA is the best spot for Halloween. I definitely wanna do Daphne from Scooby Doo this year, I’ve always wanted to do the Sarah Michelle Gellar version, like the purple go-go boots and the ginger wig. Maybe I’ll just make her zombie Daphne or something or vampire Daphne. But yeah, that’s definitely one of them. Maybe I’ll just do Elvira?

I am so on board with the Sarah Michelle Gellar version of Daphne.
I love her! [laughs] Icon!

Scooby Doo 2: Monsters Unleashed is like, so underrated.
Yes, totally! I really want Spooky Island to be a real theme park. I would so go.

I’m with you there. Who’s your favourite TV or movie witch?
Jessica Lange, Sarah Paulson and Emma Roberts in American Horror Story: Coven. Also, Anjelica Huston. I don’t remember the title. Is it The Witches, where they shrink kids into mice? You know that movie?

Yeah it used to scare me so much when I was younger.
I love that! Also Bette Midler in Hocus Pocus.

Bit dark, but what’s your biggest fear?
My biggest fear is to stay in the same place. I think mentally and in life just to feel stuck. I always wanna evolve and keep growing and keep learning. That’s like my number one thing. I don’t wanna feel like everyday is the same thing over and over again. I think it’s also because writer’s block is the worst thing to me as a songwriter and an artist, so yeah, fear of being stuck.

Those are my spooky questions out of the way. So, how is touring with Troye Sivan?
Amazing! So exciting. This whole thing happened with him just reaching out and being like, ‘Hey, wanna come on tour with me?’ I was like, ‘Yeah, duh bruh.’ Then we just did it! He’s amazing. I love him, he’s such a great artist, and we’re having a blast on tour, playing for sold out venues [laughs]. We were just at Radio City Hall in New York, and that was amazing. I’m happy I get to go on tour with like, friends. It just feels like friends on tour.

You’ve been releasing lots of singles outside of your EP, can we expect an album for them?
I cannot completely reveal that! There’s definitely going to be an album next year. There’s definitely going to be so much more music, but they belong somewhere. When we put out I Don’t Want It At All, we decided to put out a single a month, and that kinda totally broke me, putting out stuff constantly. There’s a very streaming-oriented way of releasing stuff, and how does an artist break through nowadays? It’s a crazy world out there with streaming. There’s so many artists, there’s so many songs… I just wanna give people music constantly, and give them mixtapes, give them singles, as much music as I can possibly give them!

Turn Off The Light Vol. 1 is now available on iTunes and streaming services.