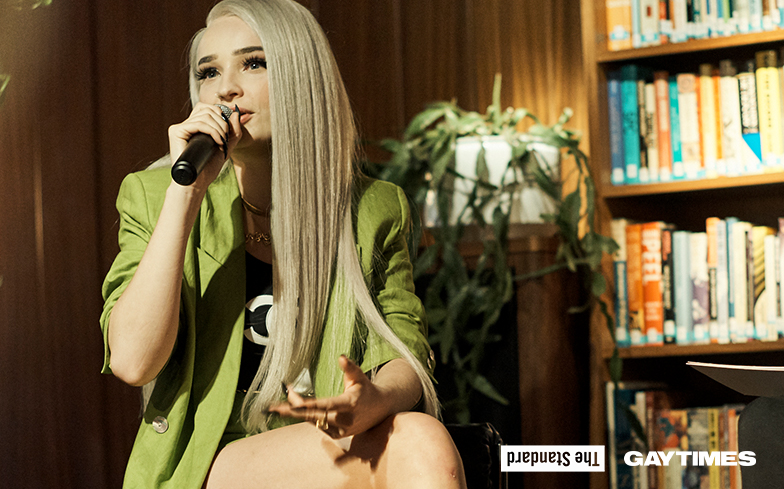 Kim Petras discussed her career during an exclusive Q&A with GAY TIMES.

The pop superstar appeared at The Standard hotel in London on Wednesday (21 August) evening for an intimate acoustic performance of three songs – Blow It All, Hillside Boys, and a stunning cover of Human by The Killers – for a small group of fans.

She also took part in an on-stage Q&A, where she opened up about the heartbreak that inspired her new collection of songs Clarity, and how it originally was going to be a completely different sounding record.

“I feel like my clarity in this process came from being in the studio and making music, because that’s what makes me happy. That was my realisation. So I took all the sad songs on the record and turned them into, ‘I’m still that bitch’ songs.

“I really wanted people to go out and feel like, ‘I’ve got this’ after listening to them. I feel like I achieved that, and every song has a confidence boost, even if they’re sad.”

Asked who her queer icons were growing up, Kim said: “As a kid I really looked up to RuPaul, I loved everything he did and I was obsessed with him, and probably Amanda LePore as well, she’s a legend.

“I didn’t have a transgender pop star back then, so those were the two people I looked up to.”

She also revealed that her dream collaboration would be with Daft Punk, the one song she can’t live without is Your Disco Needs You by Kylie Minogue, and the songs that make her emotional are The Power Of Good-Bye and Frozen by Madonna.

If you want to catch Kim live, she’ll be performing at Manchester Pride this Saturday (24 August), heading to Reading Festival on Sunday (25 August) and headlining her own show at Heaven in London on Tuesday (27 August).