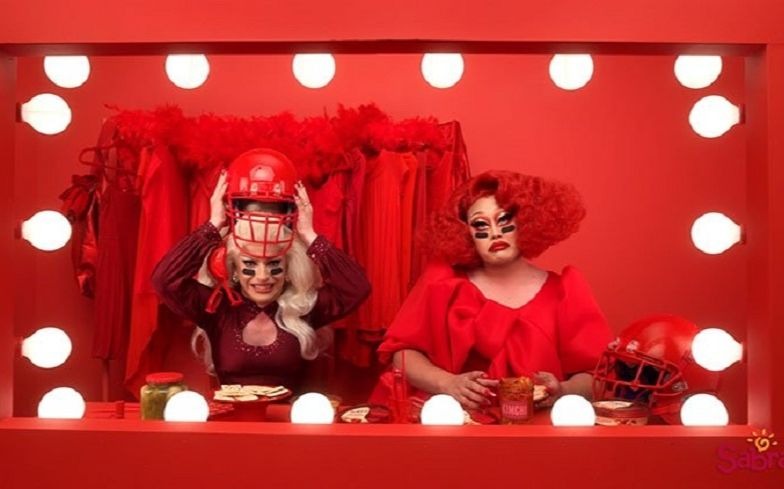 The pair will be in an ad for Sabra hummus.

Drag Race stars Kim Chi and Miz Cracker are set to make herstory as the first drag queens to appear in an ad during the Superbowl. During their time on the show, Kim Chi finished as one of Season 8’s runners-up while Miz Cracker finished in fifth place on Season 10.

In a 15-second teaser video, Cracker is seen saying: “I hope this doesn’t give me helmet hair” as she attempts to put on an American football helmet, while sat next to a bemused Kim.

Jason Levine, the chief marketing officer for Sabra, said: “Hummus is for everyone and pairs well with nearly every food you eat. Whatever your passion, however you live, love, eat and enjoy life, this plant-based food is a winner.

“We’re bringing a diverse group of personalities to the table and demonstrating just how incredibly versatile, relevant and relatable hummus is today. We think we’ve got something for everyone.”

Watch the small teaser below:

Also at this year’s Superbowl will be Katie Sowers, who will be the first woman and openly LGBTQ coach at the event. Sowers is the offensive assistant coach for the San Francisco 49ers, whose win against the Green Bay Packers secured them a spot in the championship game.

When Sowers came out in 2017, she said that one of the most important things in life is to being “true to who you are”.

“There are so many people who identify as LGBT in the NFL, as in any business, that do not feel comfortable being public about their sexual orientation,” she told Outsports. “The more we can create an environment that welcomes all types of people, no matter their race, gender, sexual orientation, religion, the more we can help ease the pain and burden that many carry every day.”