Kids Play a bedroom farce with a hidden heart – review 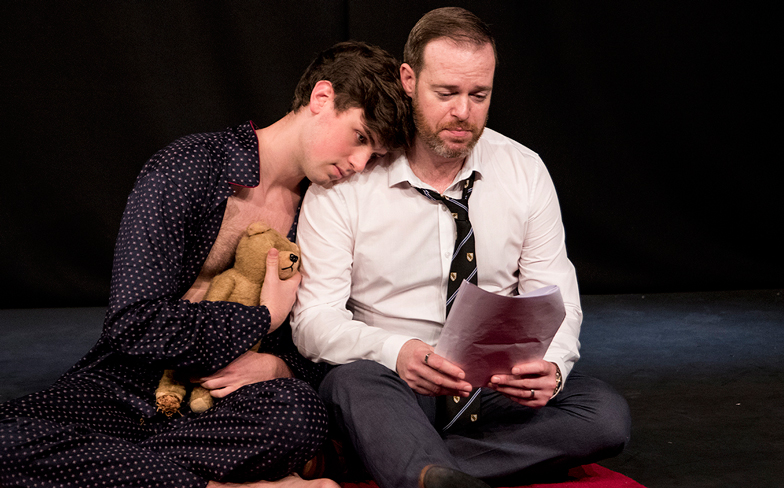 Fresh from a successful run in Edinburgh, this clever new comedy now playing at London’s Above the Stag Theatre examines exactly what it is that male escorts are being paid for…

Money is changing hands in a Brighton hotel – and it has nothing to do with the insurance conference that’s being held there. A businessman has arranged to meet a seventeen year old boy in his room for an unforgettable evening… ‘Kids Play’ is the latest work from the pen of Glenn Chandler, and – as we’ve come to expect from the author of last year’s smash ‘Lord Dismiss Us’ – it’s witty, raunchy, and enormous fun. However, Chandler – here also taking on directorial duties – knows his characters and subject matter intimately, and there are painful truths hidden away at the heart of this bedroom farce that make it so much more than the knockabout comedy that it might first appear.

David Mullen gives a star turn as businessman Greg – here having to cope with phone-calls from his wife and potentially eavesdropping colleagues in the adjoining rooms. Due to the clandestine nature of this hotel hookup, we’re often not quite sure if Greg is telling the truth or not – and Mullen keeps us guessing about the true nature of his character.  This is a multi-layered performance that ends up firmly tugging upon the heartstrings. As teenager Theo, Joseph Clarke is a cheeky and adorable ball of energy – his flair for comedy keeps proceedings light and lively, and the vulnerability that he brings to the part is extremely affecting. The two performers have an excellent rapport that makes for compulsive viewing.

Underneath plenty of entertaining antics with bondage rope and spanking paddles, this is a thoughtful mediation on the needs and desires of men who love men. The morality of the situation is addressed and explored in a responsible and adult manner. Kinky, quirky, and ultimately rather beautiful – this is well worth your time.