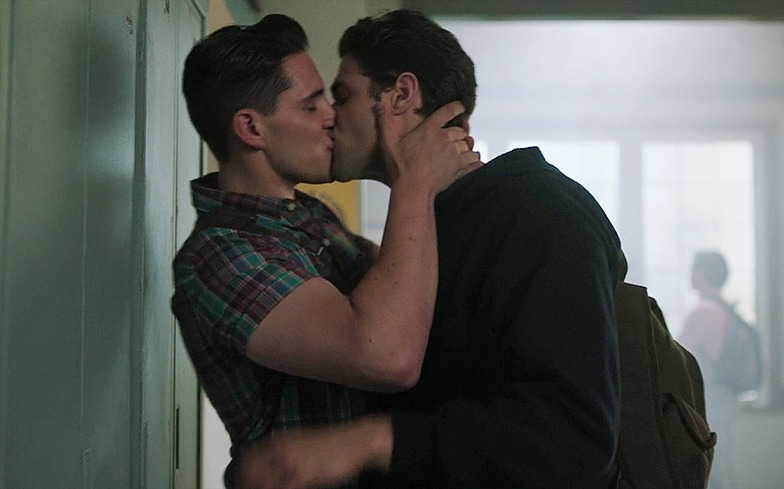 Popular teen show Riverdale, which is based on the classic Archie Comics characters, first introduced us to gay high schooler Kevin Keller as he was hooking up with closeted jock Moose in the woods… right before they found a dead body in the river.

Fast forward to the first episode of season three, which aired last week, and the pair have spent the summer together. While they were only on screen for around 30 seconds, it was enough time for them to make a deal to lose their virginity.

But, as we warned you earlier this week, there’s trouble ahead for the new couple.

This week’s episode began with Kevin ambushing Moose in the corridor at school, pulling him in for a kiss which, for all intents and purposes, should have been reciprocated by Moose – but instead he quickly pulled away in fear.

“Dude, what are you doing?” he questioned.

“What we’ve been doing all summer! I thought we could sneak off to the boiler room,” suggested Kevin.

“My dad is right over there. He’s the new RROTC instructor, and he’s making me sign up. So if he’s gonna be around school, we have to take it easy,” replied Moose. We’re still not quite sure what the RROTC is, exactly, but fans have suggested it could stand for Riverdale Reserve Officers’ Training Corps, which makes sense as Moose’s dad refers to him as Cadet Mason when he spots him in the corridor.

Later on, when Kevin bumped into Moose at Pop’s Diner, he tried once again to put their feelings on display in a public space, but he was interrupted when Moose’s fellow cadets walked in behind him.

“Me and some of the guys from the RROTC are having a chow down, but I’ll see you at school tomorrow,” he said, brushing Kevin off.

“Moose, are you ashamed of me?” Kevin asked What does the future have in store for Kevin and Moose? We’re keeping our fingers crossed for a happy ending.

Riverdale is available to stream on Netflix UK, with new episodes added every Thursday.