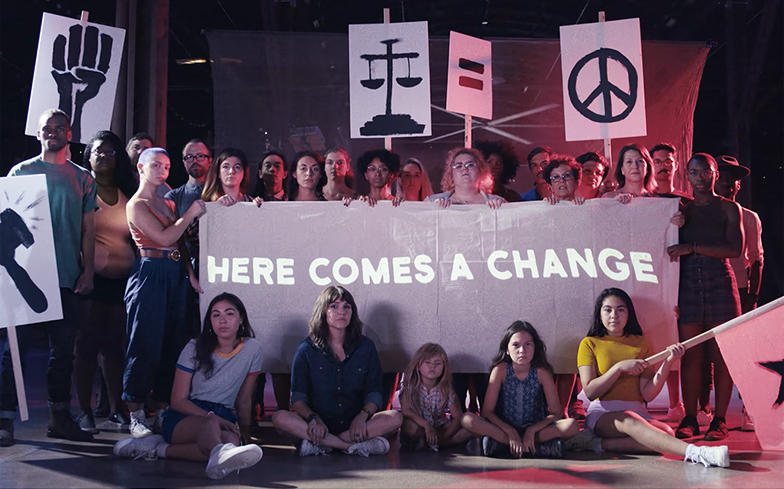 Kesha has released a brand new single, and it’s got an important message behind it.

A year after the release of her third studio album Rainbow, which was widely regarded by fans and critics as her best record yet, the singer-songwriter is wasting no time as she’s returned with a new track called Here Comes The Change.

The song is taken from the upcoming biopic On The Basis Of Sex, which tells the story of a young Ruth Bader Ginsburg (played by Felicity Jones) as she takes a groundbreaking case before the US Supreme Court to “overturn a century of sex discrimination”.

Fitting with the film’s theme, Here Comes The Change is an uplifting mid-tempo with a soaring chorus that sees Kesha call for a day where “everyone’s equal” and warn those against equality: “This is not a phase, here comes a change.”

The song is accompanied by a lyric video starring a diverse cast of individuals promoting peace, and even features a same-sex wedding between two men – unsurprising, given Kesha’s long-standing support of the LGBTQ community.

Watch the lyric video for Here Comes The Change below.

Earlier this year, the American superstar reimagined Janis Joplin’s classic track I Need a Man to Love as a queer love song called I Need a Woman to Love, for Universal Love, an EP intending to provide wedding songs for same-sex couples.

In the video for I Need a Woman to Love, Kesha officiates the wedding of a real-life lesbian couple in a beautiful outdoors ceremony, saying: “I’m here today, in Vegas, to marry Dani and Lindsay. This’ll be my third same-sex marriage.”

Kesha also recently teamed up with British glam rock band The Struts, who she describes as “one of my favourite current bands”, for a remix of their single Body Talks. You can watch the video for that here.