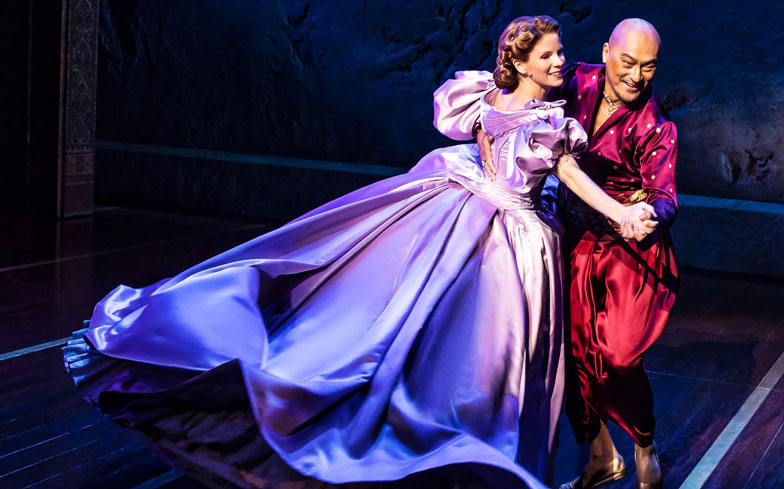 The stunning Broadway revival of Rodgers and Hammerstein’s classic musical arrives into London’s West End in glittering form – with the perfect leading lady.

When The King and I first begins at the Palladium, audiences’ are left gasping a large ship thunders onto the world-famous theatre stage. It’s an impressive beginning to a classic musical, but one you come to expect as the story progresses. With lavish set design by Michael Yeargan throughout, such an impressive tone remains until curtain down – the overwhelming sense of quality throughout. And they don’t come in finer or more impressive form than this show’s leading lady.

Tony Award-winning Kelli O’Hara floats into her first arrival in this story to thunderous applause. It’s an applause that’s justly deserved as she presents one of the finest interpretations of Anna Leonowens we’ve ever, ever seen.

Note perfect, elegant and wonderfully humorous and charming throughout, there’s a real sense of privilege that you’re getting to witness a performance like this. Weirdly, and thankful to us attending, this show marks Kelli’s West End debut. A regular on 13 Reasons Why and a Broadway top hitter, she lives up to all the hype with her name at top billing.

Related: Gok Wan and Gay Times join All Out to give the world a Global Pride Makeover

Recruited by the King of Siam to educated the many children he has with the many wives he’s married, this is a classic Rodgers and Hammerstein tale. With a great arch, it is a story that’s close to being a little outdated – but enjoyably ironic that you can laugh at how far we’ve all come.

Bartlett Sher’s production might dazzle in female form, but does it hold up when it comes to a leading man? Well, of course, as Ken Watanabe thunders to victory as the King of Siam. Although struggling a little vocally at times, his thunderous and blunt personality simmers to form a relationship with Anna that’s something rather wonderful.

With cultural hurdles, additional storylines happening elsewhere within the palace walls and a score that you already know better than you think, this really is a perfect evening out. Co-stars Na-Young Jeon and Naoko Mori fight to keep up with their leading co-stars, and do so rather well, but there’s only one lady that’ll be on your lips as you depart the theatre, and that’s Ms O’Hara.

Just give her the damn Olivier Award now.