Keiynan Lonsdale talks Love, Simon’s impact and why it’s time for a queer superhero on the big screen 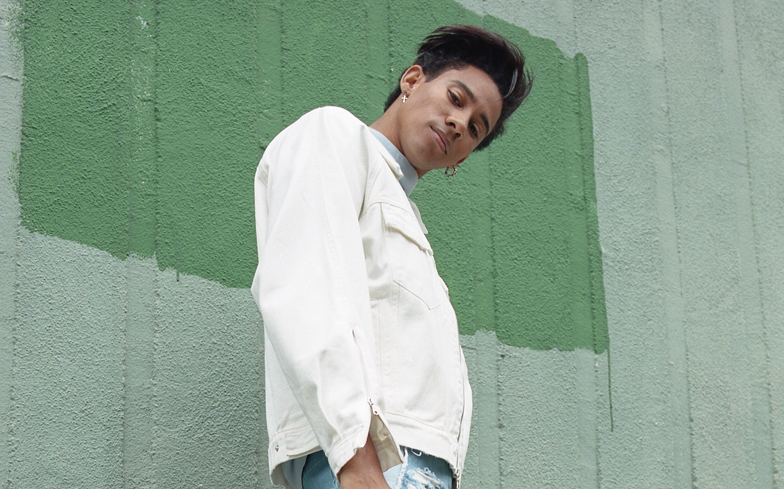 When Love, Simon was released in cinemas earlier this year, it made history as the first ever romantic comedy by a major film studio to feature a gay lead and be centred completely around a same-sex love story.

It was a breakthrough moment in Hollywood, and one what proved both critically and commercially rewarding for 20th Century Fox, at long last dismissing the myth that queer romance on the big screen is unlikely to be a mainstream success.

“We knew it was going to be really important to people,” actor Keiynan Lonsadale – who plays Bram in the film – tells Gay Times. And it was in ways the team behind the project didn’t foresee.

So many young queer kids came out to their friends and family as a result of watching Love, Simon, gaining the confidence and feeling empowered to live as their authentic selves.

As the film gets its home release, Gay Times caught up with Keiynan to talk about the positive impact of the film, if he’d be up for starring in a sequel, and why it’s about time we had a queer superhero on the big screen.

How have you found the reaction to Love, Simon since the movie was released in cinemas?
It’s been super beautiful. It’s such a cool thing to have such genuine responses and heartfelt messages from people. It cements the fact that art can help change the world for the better. It’s really inspiring to me.

It has also inspired so many young people to come out, so it must feel great it has had so much of a positive impact on LGBTQ youth?
Totally, and then the more people who come out, the more it shows other people who are struggling with it that, ‘Okay, maybe this isn’t such a scary thing. Maybe we can live authentically.’ It was an amazing surprise to see the amount of people who were actually taking that step so quickly. Some people even came out to their friends and family in the cinema after watching. It’s just so beautifully insane and wonderful.

Did you expect it to have that kind of impact when you were working on the film?
We knew it was going to be really important to people. It wasn’t until we actually watched the film – because I guess while we were making it we were just nervous, and everyone’s hopeful that we’re going to get it right and tell this story correctly – so then when we watched it we were like, ‘Oh we did!’ Every person involved did exactly what they were supposed to do. This movie was clearly supposed to be made, and I knew at that moment that this would help change things for so many people.

Have fans got in touch with you personally about how the movie has helped them?
I get messages every day and I think generally what I find the most heartwarming is that people are so thankful to the story and the fact is exists. Even to me for sort of sharing my own journey, and when they say that they are excited about their life and being themselves and they feel proud, it’s just like a huge moment. That to me is just really special. It makes me pretty emotional.

Love, Simon has become such an important cultural moment for queer visibility in the mainstream, so was that one of the reasons why you wanted to take on this role?
I knew that this movie needed to be made, and that I’d be extremely lucky to be a part of it. I also knew that whoever got the role, it was going to be the right person and as long as it got made correctly… I knew with Greg Berlanti directing it, I was super hopeful that it was going to be told with love – and it was.

Because of the overwhelming positive reaction it has had, has it made you want to seek out more queer roles in film?
Yeah, I am open to any role that feels authentic, interesting and exciting. But one hundred percent, I’m definitely keen to portray more queer characters – and in new ways. Love, Simon and so many other LGBTQ projects are now paving the way for more stories and different stories to be told in different lights. I think this could be really really exciting.

Now having seen the film yourself, what’s your favourite part of the movie?
There’s something about the Ethan and Simon scene in the principal’s office. I don’t know what it is about it fully, but it’s one of my favourite scenes. It always comes to mind. Just because you’ve got two queer characters together having a conversation discussing their individual journeys that are different, but also realising it’s the same. That’s the huge thing: it’s not just one character, it was also great to hear from Ethan and to understand his struggle a little more. It just felt that was a really important scene.

Ethan isn’t in the novel, so do you think it was important that his character was added to the film to highlight the diversity that exists within the gay community?
Definitely – it was so important. There’s only so many characters you can fit into the film, but they did an amazing job at showing a little bit of that diversity. Ethan was an integral part of having that representation there for people.

Love, Simon author Becky Albertalli has released a follow-up novel called Leah On The Offbeat, so would you be up for reprising the character of Bram if they turn that into a movie too?
Yeah I would. Just for the fun of it, and I know it would be an amazing experience. At the same time, it also does seem like one of those films where it was so perfectly tied together that a sequel movie would scare me. The first one is so good! If it was something that happened organically and everyone felt like there was more to show on film with these characters and it will help people… Y’know, if it felt right, then yes.

GLAAD reported recently that there was a year-on-year decrease in LGBTQ representation in major movie studio movies in 2017, so what do you think needs to be done to make sure that changes?
We continue the conversations, we continue to fund projects like this, and putting a lot of money into them. We need to understand that audiences are ready and excited to see these characters fleshed out. There’s a lot that can be done. We are on the right path. It’s important that we stay positive because that’s what is going to keep us going in the end.

As someone who works in Hollywood, what are the challenges you’ve faced as an out actor?
I can’t really say what the challenges are now, but I think before it was believing the lie which is if you come out you’re not going to have a career. Because everyone believed that lie, including the people lying, it was really hard for people to do that. Slowly over time there was more people coming out. I did it for myself. So the biggest challenge was taking that step, and once I did I honestly just started going with the flow. There might be challenges that come up – and I’m sure there will be – but to me, I’m not going to look at them as something to do with my sexuality, I will decide what is a challenge for me and what I will fight for. But honestly, it’s been a really positive, beautiful experience in terms of being out publicly. It wasn’t always this easy, and it’s definitely been a big journey to get here.

After working within the superhero genre on TV as Kid Flash in The Flash, do you think it’s time for a queer superhero to be on the big screen?
Oh yeah, one hundred percent. That’s why Love, Simon was important because you got not just a queer character, but you got them as a the lead in a major movie. So it’s important that when we are… just when you have Superman and Batman and all these people that kids look up to and think, ‘Wow, you’re perfect and amazing and a superhero,’ we need to see that very very clearly for a queer character on the big screen. Then LGBTQ can know that yeah, you as well, just as these other people, are also larger than life. You can be magical, you can be a superhero.

Congratulations on your single Kiss The Boy earlier this year – were you expecting such a positive reaction to that song?
It’s the biggest reaction I’ve had to any of my songs and it was even more beautiful to me that not only was it being received so well, but that it meant so much to me and that was the one that seemed to bring about such good energy. I was so happy and I still can’t believe it. At the same time I remember when I wrote the song and feeling that I knew I was meant to write it – that it was a song that had to come out.

Why did you feel it was an important song to record and release?
Because when I was a kid, one of the main reasons why I hid my sexuality is because I knew I wanted to do music and wanted to have this career, but I didn’t see any young cool black guys saying, ‘Yo, you can kiss the boy if you want – it’s okay to love who you love.’

Everyone that I loved, they weren’t that – they were straight. Obviously the way society built our view on being LGBTQ, and so I realised, ‘Wait, I didn’t have that, but now I get to create that and I know what this would’ve meant to me.’ This would’ve changed my life. I know there are beautiful queer songs out there, but I realised in that moment when I stood up that, whoa, there isn’t a song that says, if you want to kiss the boy, you better kiss the boy right now.

Are Kiss The Boy and Preach going towards a bigger project like an album or EP?
Yeah, I’m writing an album at the moment. I’m very impatient and I’ve wanted to put stuff out for so long, but it keeps growing so I have to respect that process. At the same time, I think I’m in a good position no where I have a little more time to put into the music side of things. I’m very very excited to share what’s next.”

Love, Simon is available as a digital download now, and will be released on DVD in the UK on 6 August.