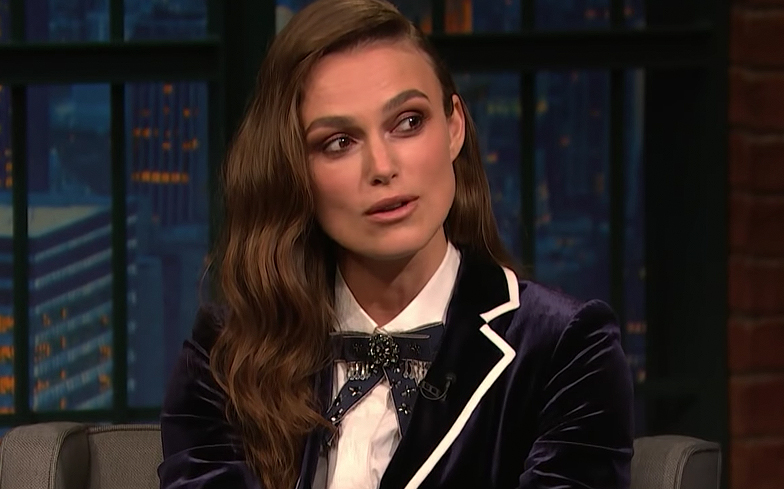 Keira Knightley has opened up about going to her school prom with another girl as her date.

The British actress recounted how she went with a female friend who was gay, and when they kissed for their prom photo the school to failed to display it as it was deemed “inappropriate”.

“I went with my best friend, who was a girl and also gay,” Knightley said during her appearance on Late Night with Seth Myers. “We had a kiss on a prom photo, and they banned our photo.”

The star was appearing on the chat show in support of her new film Colette, in which she plays the Nobel Prize-winning French novelist Sidonie-Gabrielle Colette, who went on to become a leading literary figure and a sexual revolutionary in the late 1800s.

In the trailer, we also see Colette explore her gender-fluidity and her relationship with French noblewoman Mathilde de Morny (Denise Gough).

Keira has spoken previously about her prom date experience, revealing that she was called “disgusting” for kissing her friend.

“I went to prom with my best mate, Emily,” she told Vulture. “We both turned up an hour late, and I’d been filming Bend It Like Beckham, and I turned up in leather pants and a crop top, and she was a model for a while, and she’d been in Paris shooting something, and she turned up as the boy, so she had a black tie with ripped jeans on, and everybody else was completely dressed up, obviously, in that kind of finery, and then we had our picture taken underneath the thing, and she’s kissing me, and we were told that that was disgusting.

“And one of the teachers took us both aside and said we were never going to come to anything if we didn’t know how to dress appropriately for events like that. So that was my prom. We had a great time!

“Our photograph, though, wasn’t allowed — you know when you get up and, I don’t know if this is in America, but you collect all the photographs of prom and you buy whatever ones you want. Ours wasn’t allowed to be displayed on that because it wasn’t appropriate.”

Meanwhile, Keira recently put her support behind a sequel to beloved British drama Bend It Like Beckham, where she’d like the characters of Jules and Jess in a same-sex relationship.

Watch the trailer for Colette below: