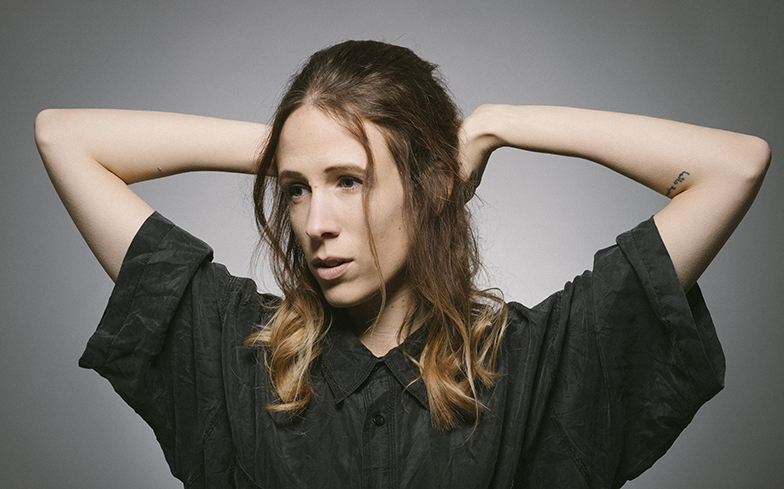 Katey Brook’s new single All Of Me is a heart-wrenching queer love song.

On the soulful track, the proudly gay singer-songwriter begs a lover to be upfront about her feelings – “So why’d you walk away, when you tell me you never felt this way?” she questions – and where their relationship is heading.

“It was inspired by a painful situation I found myself in with an ex, and her ambivalence during a time when we were attempting to rekindle our relationship,” she tells Gay Times. “The song confronts that classic push/pull situation many of us have found ourselves in.”

To celebrate the release of her new single, we spoke to Katey about her musical inspirations, staying true to her identity in her music, and what it’s really like to grow up inside a cult…

How did you get into music?
I think music kind of got into me really. Both of my parents had a big connection to it – my mum through dance, and my dad having been a singer-songwriter himself. According to my mum I started singing before I spoke properly, and wherever we’d go if there was an instrument I’d want to play it. I used to sit listening to John Lennon tapes on my walkman for hours as a little kid, and I remember thinking there was nothing better than music.

Who influenced you growing up?
Predominantly male artists at first. I was obsessed with John Lennon and Elvis, and as I got into my teens I fell in love with singers like Otis Redding and Jeff Buckley. I’m a sucker for that level of emotion in a voice. Later on when I started writing I got into female singer songwriters like Tracy Chapman and Joni Mitchell. Again I loved the intensely emotive voices, and I found their lyrics so evocative and relatable.

You grew up inside a cult, which isn’t something that many people can relate to. How was that experience?
Very true, it wasn’t at all relatable, and I didn’t share it with the outside world for years. Oddly at the time it all felt completely normal because it was the only reality I knew. But that normality was a frequent feeling of fear, loneliness, shame, to name but a few emotions. Those feelings were contrasted by moments of complete hilarity and deep friendship with other kids growing up in the cult. The latter part was a lifeline, and the allies I found became lifelong friends.

How did this influence you as an artist?
I think every thought and feeling that has transpired from growing up in the cult, and subsequent difficult life experiences, has spilled out of me and into my music and voice. It’s the way I emote, which I’m sure a lot of musicians will relate to. Often times it’s the only way. I’d say that’s why a lot of my songs are on the emotional side of the fence! The experience also forced me to delve into my spirituality and my place in the world which has influenced my lyrics a lot.

Your new single All of Me is amazing – can you tell me how it came about?
Thanks so much. It was inspired by a painful situation I found myself in with an ex, and her ambivalence during a time when we were attempting to rekindle our relationship. She declared deep love for me, and yet went on to behave in a manner which expressed very much the opposite. In a broader sense, the song confronts that classic push/pull situation many of us have found ourselves in, and says “if you love me don’t just say it, show it.” Because talk is cheap – actions tell you everything you need to know about a person’s love for you, in both romantic and platonic relationships.

Your new material sees you using female pronouns instead of ‘you’. Is this important for you to do?
Absolutely. I hid for so long, I was really scared of feeling vulnerable and exposed, and also being judged by the industry. Many times I was told that ambiguity was safer for me and my career, and as a youngster I accepted that as gospel. Using ‘she’ is not only my being real, but it’s a way of letting go of any unfounded shame I’ve carried along the way. It feels good to be free.

How important is it that the LGBTQ community has out and proud artists that they can look up to?
Essential. We all need people to look up to and be inspired by, not least of all young LGBTQ people growing up and trying to find their way. At times I wish I had tapped into the beautiful community we have sooner because I know it would have helped me a lot on my journey. Seeing people out there, joyfully being who they are, puts out the important message that there’s nothing to be ashamed of, and that our sexuality is a beautiful, natural thing.

What do you think are the challenges LGBTQ artists still face in the industry today?
I was told by industry professionals on several occasions that talking about my sexuality would mean I’d be pigeon-holed, or people simply wouldn’t be able to relate to me or my songs. I’ve heard other LGBTQ artists say that too. I think there’s still a strong degree of separation between LGBTQ and the ‘mainstream’, and I really look forward to the day when sexuality is irrelevant.

You haven’t released an album since 2016 – can we expect a follow-up soon?
You can! My album REVOLUTE comes out on 31 May. I can’t wait to share it, it’s been an epic and winding road getting here. We’re also launching a special members area on my website at the beginning of May too where there’ll be signed copies and lots of exclusive goodies and videos available.

To find out more about Katey Brooks and her music visit kateybrooks.com