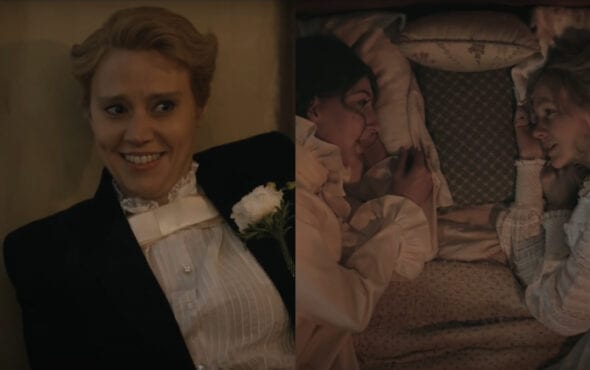 “Starring two straight actress who dare not to wear makeup.”

The hilarious skit was a parody of films like Portrait of a Lady on Fire, The Favourite, and the recently released film Ammonite.

At the start of the video, we see an exhausted Mulligan being brought into a “19th-century” doctor’s office by her husband. When asked by the physician what was wrong with his wife, the man replied “She’s a bummer.”

The doctor goes on to tell the husband she’s medically upset and then suggests that Mulligan’s character needs “seagull sounds, grey air, and long rocky walks.”

The skit then brings in Gardner, who is introduced as her female companion.

Throughout the video, a hilarious voice-over can be heard saying stereotypical plot points and themes usually seen in these types of films.

“From the makers of Portrait of a Lady on Fire and Ammonite comes a new award-winning film, Lesbian Period Drama,” the voice-over said.

“Another film that isn’t afraid to ask ‘Will these lesbians be lesbian’s together?”

But what made the skit even more hilarious was McKinnon and her starring role as the “one actual lesbian actress” who plays the stone-cold ex.

“Oh yeah, we were together for two years,” she explained.

“But the sex was so bad we broke up even though there’s not another lesbian for five full countries.”

The rest of the video is jam-packed with more tropes and jokes from these critically acclaimed films.

SNL fans couldn’t get enough of the parody and took to Twitter to praise McKinnon and the writers.

LMAOOOO THE #snl LESBIAN PERIOD DRAMA SKIT THEY KNOW OUR PAINNNN. AMMONITE + PORTRAIT OF A LADY ON FIRE + CAROL + THE WORLD TO COME

OMG. Tell me Lesbian Period Drama was not THE BEST #SNL spot on sketch with the most precise accuracy of #LGBT films?!! The hand graze, the longing looks, the painfully long running times, and then the graphic sex scene from the male gaze. They hit every cliche perfectly. @nbcsnl pic.twitter.com/2QsGePJVCm

Give me lesbian period drama Kate McKinnon, or give me death 😂☠️ https://t.co/HY7pHO1Qzm

The way this is the best lesbian period drama ever made and it’s an SNL skit… pic.twitter.com/sJ2M2cinKD

Watch the trailer for Lesbian Period Drama below.