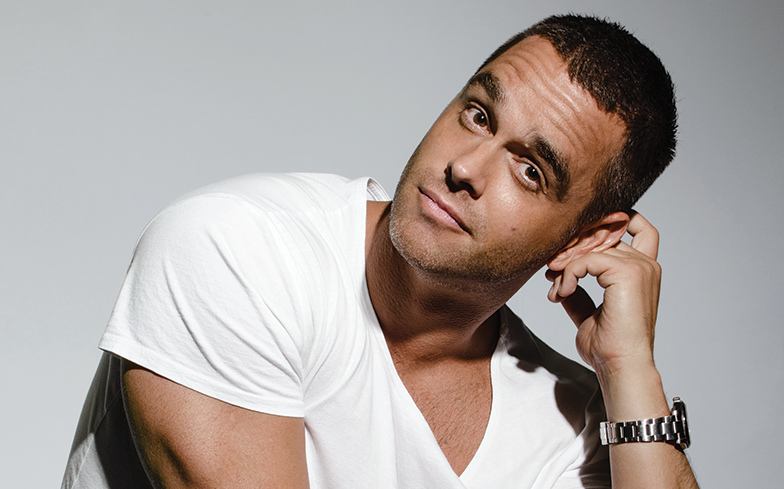 ABC reporter Karl Schmid made international headlines earlier this year when he came out as HIV positive on social media.

The Australian journalist received universal praise for opening up about his status – which he did on a whim – and has since garnered “message after message” from LGBTQ youth seeking advice.

“We have to educate people, we need to have this new conversation, and we really need to show what HIV positive looks like in 2018,” Karl tells us. “I will stand as one of these people and say, ‘Take a look at me. Take a look at this. This is HIV positive.’”

We spoke to Karl about how his life has skyrocketed in the past few months, discrimination he’s faced from within the gay community, and how we can combat the stigma surrounding HIV and AIDS.

Your life has kind of blown up since coming out as HIV positive, hasn’t it?
I didn’t think, beyond the few people who followed me and my circle of friends, that anyone would notice it, but within 24 hours it kind of went a bit crazy. It snowballed. I certainly didn’t envision myself at the World AIDS Conference in Amsterdam, or even talking to you all these months later, and getting message after message asking for advice on a daily basis. It’s taken me by surprise, but I’ve kind of embraced it. As long as the spotlight is shining, I’ll make as much noise as I can about breaking down the walls of stigma surrounding HIV and AIDS. Why do you think people connected so well with your story?
My boss at ABC said, ‘We support and love you so it doesn’t matter, but I don’t see how this is a news story’. I somewhat agree with her, but having left the World AIDS Conference, I think actually now more than ever, it needs to be a news story, and it needs to be a conversation. The majority of the world, with the exception of millennials who seem to get it in more ways than one, still have this idea that to be HIV positive means death and carries sinful activity. The stigma is horrific, but even more dangerous is the internalised stigma by those living with HIV.

I don’t think I fully acknowledged the deep internalised stigma I had against myself until I came out about this a couple months ago. It really has changed my mindset, my personality, and the way I look at myself. I was never gonna let HIV pull me down, so I thought. At the same time, I also had so many negative experiences in my personal life while trying to date that I sort of became flippant and blasé, and would say things like, ‘Oh well, I’m damaged goods, so let’s be real – who’s gonna date me?’ I didn’t think that that was damaging me quite as much as I now come to realise. So it has changed my life, but there’s so much hope that things are gonna get better.

What kind of discrimination have you faced when trying to date?
At some point in the dating process, you have to say, ‘There’s something I have to tell you’. More often than not, in my case anyway, people were furious with me, and they were like, ‘How dare you? Why the fuck wouldn’t you tell me this at the beginning?’ It’s like, ‘First of all, I’ve not put you in a position of any danger or risk’. The big news that came out of the conference – which has been news for a long time but a lot of people still don’t know – is that undetectable truly equals untransmittable. It is now scientifically and medically proven by the top scientists that categorically, there is no way that you can transmit HIV if you’re healthy and undetectable.

I was healthy and undetectable, but I still had drinks thrown in my face, I was called every name under the sun, I had people stop talking to me, I literally had people shut me out of their lives. So you try another approach. You go on a first date, sit down and you go, ‘Just before we get started, I just wanna let you know that I’m HIV positive’, and people would look at me like I was an idiot. It’s either, ‘What, you think we’re gonna have sex?’ or ‘Why are you telling me?’ I was damned if I did and damned if I didn’t. I just kind of stopped dating and thus, the internalised stigma of myself began and I thought, ‘Well, I’ll just be single’. How do you think we can combat the stigma surrounding HIV and AIDS?
We have to educate people, we need to have this new conversation, and we really need to show what being HIV positive looks like in 2018. I will stand as one of those people and say, ‘Take a look at me. Take a look at this. This is HIV positive, and I’m not about to waste away in a hospital bed and shit myself and die’. And one of the easiest things we can do as gay men to change, when we’re on Grindr or Scruff or whatever app you choose to use, asking someone if they’re clean… People don’t realise how deep that can cut somebody. It implies that I’m not clean. People ask me and I say, ‘Yes, squeaky, I shower twice a day’. That’s my response.

They don’t even think about it, and they don’t realise that asking someone if they’re clean implies that if you’re HIV positive, you’re dirty. There’s always gonna be people who hate us, and don’t like us, but my argument with that is: If you don’t like gay people or HIV positive people, chances are, you don’t really know any. You don’t socialise with them, so why do you care? I could understand if me being HIV positive and gay meant that Frank Smith living down the street was gonna earn $10 less a month. If that meant that he was gonna lose that money out of his pay cheque, I would understand why he would wanna fight me. Chances are, Frank Smith doesn’t know me, doesn’t have any friends like me, and my life has zero impact on his life, so why the fuck do you care mate?