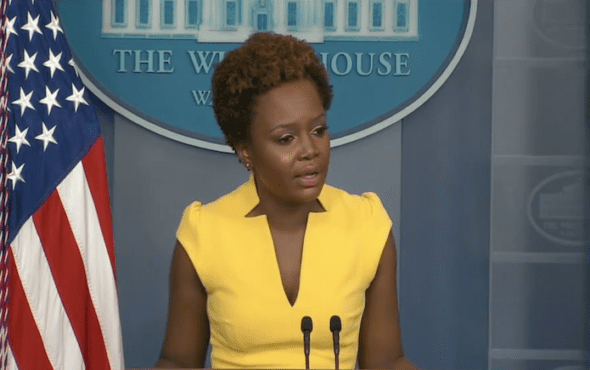 The White House principal deputy press secretary is the first Black woman to lead a briefing, on behalf of the US president, in the last 30 years.

Change is unfurling at the White House. On Wednesday (May 26) Karine Jean-Pierre became the second Black woman to take her turn in the James S. Brady Briefing Room.

Jean-Pierre is the first Black woman to address reporters since Judy Smith, a deputy press secretary for President George H W Bush, in 1991.

Opening the briefing, the press secretary acknowledged the momentous occasion.

“It’s a real honour to be standing here today,” she said. “Clearly the president believes that representation matters and I appreciate him giving me this opportunity.”

“[Jean-Pierre] is doing her first full briefing from the podium today making history in her own right,” Psaki posted. “But doing her real justice means also recognizing her talent, her brilliance and her wonderful spirit.

Today is a big day in the press office and @WhiteHouse. My partner in truth–@KJP46 is doing her first full briefing from the podium today making history in her own right. But doing her real justice means also recognizing her talent, her brilliance and her wonderful spirit.

The newly appointed 43-year-old is a commentator, academician, and compelling politician who happens to identify as a queer woman, giving the potential future administration some much-needed LGBTQ+ representation at the top level.

Making her mark in the press briefing room, Jean-Pierre is the first openly gay woman to address the press corps.

Before being appointed as deputy press secretary, Jean-Pierre served as a senior adviser to Joe Biden’s presidential campaign, working as a national public affairs officer.

The 43-year-old Haiti-born has been holding renowned positions in both Democratic and progressive organisations for more than a decade.

In 2011, she served as a regional director for President Barack Obama’s 2012 reelection campaign. Additionally, she is also a lecturer in political campaign management at Columbia University.

Having successfully moved up the political ladder, Jean-Pierre’s moment is a powerful step forward showcasing the need for representation and LGBTQ+ inclusivity on all levels.

Karine Jean-Pierre, an out lesbian, for the first time kicks off the regular White House news briefing. pic.twitter.com/16sy1YJje6

You can watch the historic press briefing here or below:

Tune in for a briefing with Principal Deputy Press Secretary Karine Jean-Pierre. https://t.co/omSyVeSo9S