Kameron Michaels on her ‘trade’ status, being an introvert, and whether she’d return for All Stars 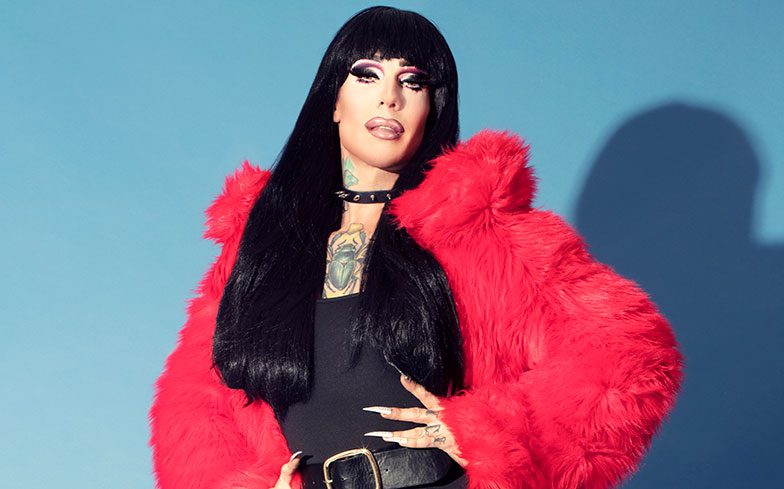 Kameron Michaels is no one-trick pony.

She may have polarised viewers with her silent yet strong disposition, but this queen more than proved her worth by making it to the top three of RuPaul’s Drag Race season 10, winning countless lip syncs, and serving some of the most sickening looks ever seen on the show along the way.

Now that you’ve had some time to process everything that’s happened over the last year, how are you feeling?
Very, very, very happy! I think everyone could see that the journey towards the end was a little rough for me, so the show being over and done with and being able to go out on the road and tour and meet all the fans and do my own thing, it’s a very welcome experience after what was quite a rough patch for me.

That finale must have been really tense. What was going through your mind at the time?
I was actually very happy and very relaxed during the finale. I wasn’t nervous at all when I was on stage, I think I was just really happy that everything was kind of coming to an end, and I was ready to close that chapter and move on with my career. So that was actually a very happy night for me.

After last year’s incredible finale with Sasha Velour’s rose petals, did you feel an added pressure to plan reveals or stunts for your lip syncs?
I think all four of us did. Sasha has her type of drag that she does, which is absolutely phenomenal, and that’s pretty hard to live up to, so we all tried to do our own thing without copying anything she did. It was important to keep our drag our own. But yeah, I think she set a very high bar for the finale. You were on stage with Asia when her butterfly reveal happened, were you aware of what was going on?
I was not aware, and there’s actually a meme floating around of my face when I realised what had happened, but I didn’t know! I had no clue until the lip sync was completely over.

Some fans have criticised the use of reveals as gimmicks, and believe the focus should be on the actual lip syncing. What’s your opinion on this?
My focus has always been on my lip syncing, and it’s funny that you say that because my lip syncing was what got me as far as I did, and yet even I felt the pressure that I needed some kind of gimmick or a reveal, especially in a theatre setting that large. It’s not a bar, so I think people expect something more. I definitely felt the pressure.

During the reunion, a lot of the other queens said you were cold or rude to them. Did that hurt?
Yeah, of course it hurt, because I thought I had a good relationship with all these girls. I’m very busy right now, so I’m trying to keep up with everything going on in my life, and it’s a little hard to remember to reach out to everyone to make sure they’re okay and they’re happy. I didn’t realise that’s how they felt about me. I mean, it was definitely a little exaggerated on their part, but it did help me realise that I need to try a little bit better to reach out and make sure all my sisters are doing well. So it was good and bad.

Do you feel like there’s an unfair pressure on drag queens to be these loud and outspoken beings all the time?
Yeah, definitely. But what’s happening now is that a lot of people are telling me I’m one of the most relatable queens they’ve ever seen on the show, because I’m so different personality-wise. I’m a little more quiet and reserved, I’m not a loud personality like a lot of other people on the show, and I’m happy with that because I think there needed to be a conversation about introverts in an extrovert world. We’re here and we exist.

You’ve also been referred to as the ‘trade queen’ of the season by a lot of viewers. Is this something you enjoy, or would you rather people focus on your drag?
I’ve said from the beginning that I’d rather people focus on my drag. My looks aren’t a talent, so I’d like people to pay attention to my actual talent, which is my drag. Now, am I offended by the term that I was given? No, not at all [Laughs]. But I would like for people to pay attention to the hard work I put into my drag. In the beginning, people couldn’t fully see my drag, so that ‘trade’ thing was all they had to go on, but once people saw my performances and my style on the show I think they started paying attention to my drag.

It’s time for the big question… Would you ever return for All Stars?
Yes, absolutely. I think everybody goes on the show to learn something, and I’m definitely learning more about me and who I am, so I think I’d be a little more comfortable and a lot more outgoing next time around. I think that would be a great opportunity to show the growth I’ve experienced since filming the show, because it has been tremendous.

Who else would you like to see return for All Stars?
I mean, I would love to see Miz Cracker on All Stars, I think Monét would be great, I think we could see amazing things from Blair – I thought she was going to be final three just from watching her throughout the show, she was so talented – and then of course I think everyone expects Vanjie to have a comeback, so I think we’ll see that soon.

You’re working on your own music at the moment, what kind of sound can we expect?
I think it’s important to do something that everyone can enjoy. I want to make something I can listen to around the house or while I’m running at the gym, so I want something upbeat and dance-y, that’s probably the sound I’ll be going for. I don’t have a lot of time to make music right now, so that’s actually on hold, but as soon as my touring slows down I’ll be able to get back in the studio and make some magic.

Now that you’ve been on Drag Race and you have this incredible platform, what do you hope your impact on the world will be?
I want people to know that no matter where you come from or what you’ve been through, you can be successful in life as long as you keep trying. It doesn’t matter how many times you fall, you keep getting back up. I think my journey on the show absolutely showed that, and you can see a difference in my personality just from the last couple of episodes into the finale, because we filmed the finale months and months after the show, so you can see my progression and the extra confidence I found in myself. So I think that’s a really important lesson for everyone.