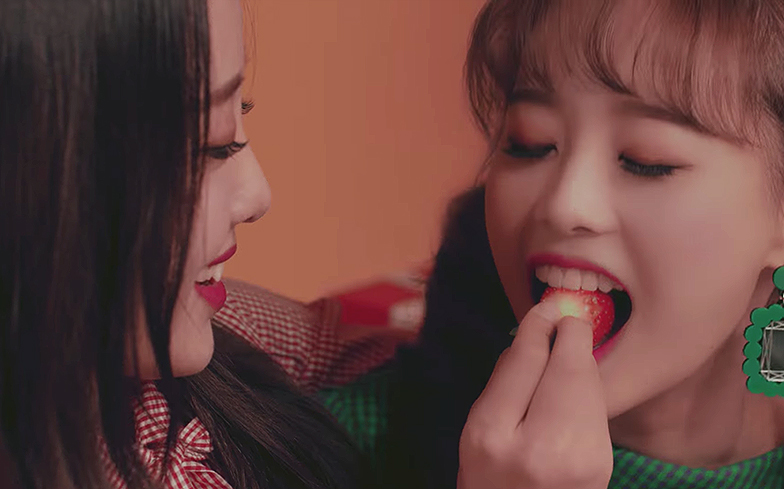 Ahead of their collective debut later this year, each member of the group have released solo singles, and the latest, titled Heart Attack, tells of Chuu’s “desire to be loved” by her bandmate Yves.

The accompanying video, which has over 500,000 views already, sees Chuu spying on Yves with her camera, before the two eventually become close as they share gifts, slow dance, and feed each other strawberries.

“The track Heart Attack does not interpret the feelings of being in love in a serious way, but with Chuu’s own adorable emoticon-like ways,” the video’s YouTube description reads.

But that hasn’t stopped fans noticing that the video appears to show a romantic relationship blossoming between the two women.

the kpop industry is kinda known for completely shutting down and shying away from anything lgbt,, but then loona comes around and makes a whole ass music video about the newest member falling in love with another female member. i love unique and accepting legends

While homosexuality isn’t illegal in South Korea, there’s still a lot of taboo surrounding LGBTQ people, especially in the entertainment industry where many stars have been ostracised after publicly coming out.

Last year, it was reported that a ‘witch hunt’ was taking place in the country’s military with the intention of outing and prosecuting gay soldiers, after a video of two male soldiers having sex emerged.

Despite this, a record 85,000 people turned out to Seoul Pride last summer, the largest in its history, suggesting that attitudes towards the LGBTQ community are slowly improving.

Check out the new video from Loona below.