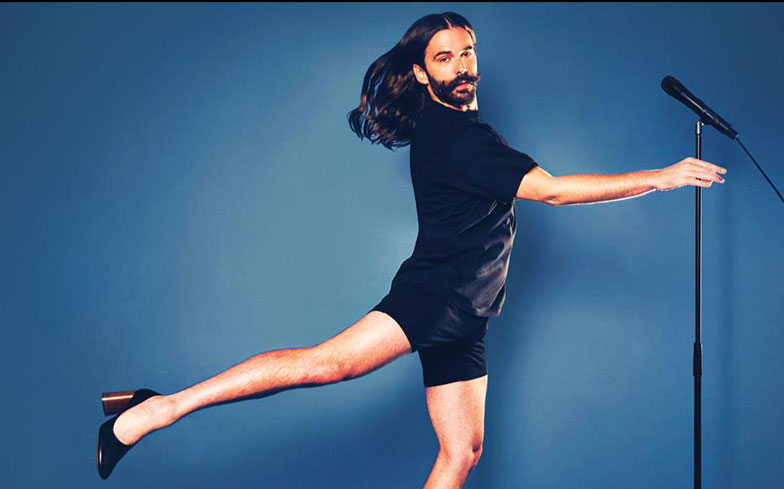 From his time as a successful hairdresser and beauty expert to international love and fame via Netflix, it’s safe to say that the last two years have been pretty wild for Jonathan Van Ness.

Now one of the most beloved openly queer people in the world, the Queer Eye favourite has gathered fans from across the globe that are literally screaming ‘Yas, Queen!’ in every direction – including here in the UK where he is currently touring as part of his Road to Beijing live show. Think of it as a comedy show mixed in with special guests, and the chance for you to find out what really makes us all love JVN.

Opening the show to Lizzo track Good As Hell, the sold of Eventim Apollo audience – of which he played two shows in one night – went crazy and he arrived in an almost transparent fierce number and matching sparking skirt. Obviously not his only outfit of the night – like, seriously.

However what makes Road To Beijing different to others is that its stories, experiences and friends are all rolled together. There isn’t a sit-down moment, questions from the audience or the expected Queer Eye section. No, this is just JVN talking at you fast, and funny, hunni! There’s even a joke about Brexit in there for good measure… although how well that went down, we’re still not sure ourselves.

Having spoken most recently about his HIV status, the continuing oppression of LGBTQ people globally, and the powers of body positivity, it’s of course not all hair flipping and smiles. There’s a heart to JVN that shines perhaps even brighter than his rainbow lights that flood the stage throughout. Road to Beijing gives us our closest look at the real person behind it all – of course, apart from the new book Over The Top, which is available now and certainly worth your time. There’s even a (hilarious) throwback video involving a cause rather close to JVN’s heart, a political rant, and some live tumbles that almost took the roof off the Eventim Apollo.

And while the celebrity life, his new friends, Queer Eye, the book and his world away from the spotlight are all spoken about with commendable honesty, his life, the audience and this level of global fame in his grasp never quite settles. It’s clear this beacon of light was always heading for great things, but never with such wealth and on such a scale. It’s humbling for JVN and is apparent to the audience in small pockets of an overwhelmed queer person being celebrated and adored – and doesn’t go unnoticed.

Road to Beijing is the perfect chapter for one of the most open and proud queer people on the planet. And while he might not have been looking for global glory, Jonathan Van Ness might have to get used to it for the foreseeable future and his star is only rising.