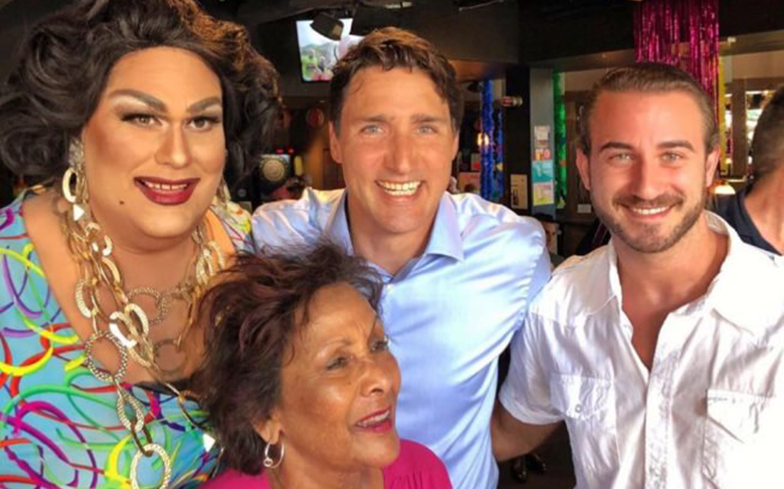 “The spirit of pride and inclusivity is strong here all year long!”

Justin Trudeau has received universal praise for visiting a gay bar in Canada.

The country’s prime minister – who has voiced his support for LGBTQ rights numerous times throughout his career – marked the start of Pride week in Canada by stopping by the Fountainhead Pub in Vancouver’s West End earlier this week.

Trudeau stopped by for 15 minutes and mingled with all the customers and staff, shaking their hands and taking photographs. It’s believed to be the first time a sitting prime minister in the country has ever visited a gay bar.

Charmaine de Silva, news director at News1130, wrote on Twitter: “People genuinely happy to see @JustinTrudeau as he visits the Fountainhead Pub, in the heart of Vancouver’s gay village.”

Trudeau tweeted shortly after: “Vancouver is gearing up for #Pride weekend right now, but the spirit of pride and inclusivity is strong here all year long! Thanks to the folks at @fountainheadVAN for the warm welcome today.”

Vancouver is gearing up for #Pride weekend right now, but the spirit of pride and inclusivity is strong here all year long! Thanks to the folks at @fountainheadVAN for the warm welcome today. pic.twitter.com/vQWgTUG9xw

When we spoke to Drag Race star Brooke Lynn Hytes about her recent encounter with the beloved prime minister, she said he was “the nicest” and revealed that his staff were all “gay men in shorts and tank tops”.

“It was so funny and so Canadian,” she told us. “He could not have been lovelier, he gave us the best hugs. He is one of those people that when he hugs you, you can feel it. I felt every one of his abs pressed against me.”

According to Brooke, Trudeau’s team reached out to the season 11 runner-up because he was a fan of the show.

“I was summoned to meet the Prime Minister,” she added. “Like, ‘Hey, I want to meet you, man in a wig.’ I was like, ‘Okay.’ It was the highlight of my life. The leader of a country reached out to a drag queen.”

See the best reactions from Twitter about Trudeau’s gay bar visit below.

This is the first time a sitting Canadian PM has visited a gay bar, and may even be the first instance the leader of a country has done this. @NEWS1130 pic.twitter.com/Vt5o1g6pum

People genuinely happy to see ⁦@JustinTrudeau⁩ as he visits the Fountainhead Pub, in the heart of Vancouver’s gay village. Apparently first sitting head of state to do visit a gay bar. No surprise. ⁦@HedyFry⁩ has held this seat for 25+ years. #cdnpoli pic.twitter.com/cIql23PRBR

Prime Minister @JustinTrudeau is at the Fountain Head Pub in #Vancouver this evening. This makes him the first sitting Canadian Prime Minister to visit a gay bar. @NEWS1130 pic.twitter.com/iwYlIO0ouz

.@JustinTrudeau took time out for a beer at a gay bar in #Vancouver's West End today, and it may have been a first for a sitting Prime Minister.#Bcpoli #Cdnpoli pic.twitter.com/HSGcTtGoAh

I like the way Trudeau is with people. Sleeves rolled up comfortable no matter who he is talking to. You would never see Scheer or Bernier walk into a gay bar. Trudeau treats everyone equal that is the way it should be.

Even though ideally it wouldn't be notable, it is great to see @JustinTrudeau socialising at a Vancouver gay bar this evening.

For those wondering: PMs in other countries have visited gay bars previously, including Ireland's then-PM, Enda Kenny in 2014.

.@JustinTrudeau, a prime minister who is genuine, who isn’t afraid to mingle, and who is comfortable in the company of any and all Canadians. Can you imagine .@AndrewScheer going to a random gay bar anywhere in our amazing country! #CDNPoli #Elxn43 https://t.co/M1Zpo9jDYd