Just how gay is the new Queen biopic Bohemian Rhapsody? 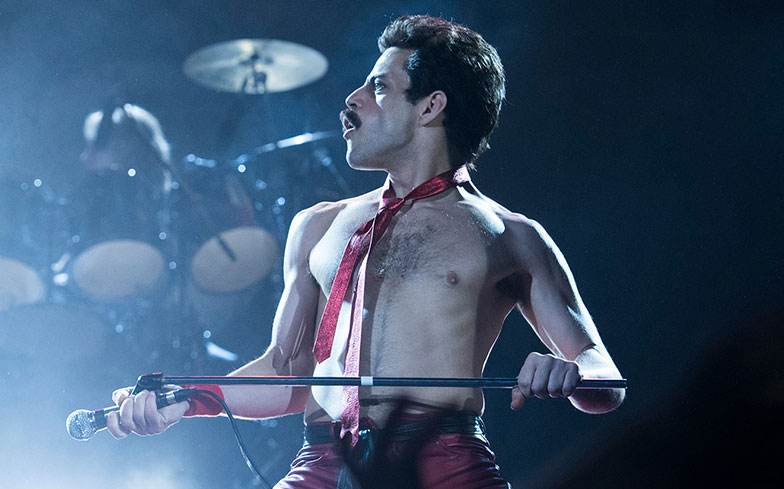 When it was announced that the long-delayed biopic of legendary rock band Queen and their iconic frontman Freddie Mercury would finally be made, fans were naturally concerned over whether the film would get everything right. Those concerns reached a fever pitch when the trailer was released earlier this year. Sure, it looked like a riotous celebration of the band’s music and history, but there was little sign of Freddie’s attraction to men and absolutely no mention of AIDS; what was included, however, were scenes of him flirting with a woman.

Fortunately, having seen the film, we can confirm that the film honours the biggest part of Freddie that makes him so endearing to the LGBTQ community to this day: his queerness.

Aside from the music, the beginning of Bohemian Rhapsody places much of its focus on Freddie’s relationship with Mary Austin (Lucy Boynton), who the star was once engaged to and described on numerous occasions as the “love of [his] life”. It’s only when the band heads out on a tour of America that his attraction to men begins to show. The first sign comes as Freddie talks to Mary on a gas station pay phone, but gets distracted as he locks eyes with a truck driver entering the men’s bathroom. Viewers are left questioning whether Freddie pursued him, but things get more explicitly queer as the film progresses.

One scene, filmed in London’s iconic Heaven nightclub, sees Freddie peruse a dance floor full of writhing bodies dressed in fetish gear: think leather, chains and gimp masks. Elsewhere, he pops pills and throws the wildest parties in town. The film never crosses into explicit territory – there’s not a sex scene in sight – but it’s clear to any viewer what Freddie’s looking for, and that he’s (for the most part) attracted to other men.

Whether Freddie was actually gay or bisexual is still a mystery. He had relationships with both men and women, but the film largely treats him as a gay man. One of the most touching scenes is when Freddie comes out to Mary, who’s still wearing her engagement ring. He tells her he’s bisexual, but she believes he’s gay. “You’re going to have such a difficult life,” she tells him. They remained friends for the rest of his life. Unfortunately, the representation of homosexuality in the film is pretty bleak, regardless of how true-to-life the experiences presented are. Mary encourages Freddie to leave Paul and come home to the people who truly care about him – herself, who he had a heterosexual relationship with; and his heteronormative family, who don’t necessarily support his same-sex relationships – and the other gay men in his life are never really presented as a positive influence on him. Meanwhile, Freddie’s bandmates are pictured in happy heterosexual relationships, and not engaging in the hedonistic lifestyle Freddie pursues. A more cynical viewer would argue that the film treads dangerously close to demonising homosexuality, and glorifying heterosexuality.

It’s only at the end of the film that Freddie meets a man who has the potential to treat him right: Jim Hutton (Aaron McCusker). In real life, the pair enjoyed a private, loving relationship in which Jim stayed by Freddie’s side until the day he died. It’s a shame it wasn’t explored more in the film, although given the timeline it follows, it’s understandable that it couldn’t be featured more.

The other issue fans were hoping would be addressed in the correct way was Freddie’s acquisition of HIV and eventually AIDS, which led to his tragic death in 1991. In keeping with the rest of the film’s glossy Hollywood sheen, the truly grim implications of AIDS are relegated in favour of shots of Freddie looking sad in bed, concern over losing his vocal abilities, and a brief scene in which he coughs up a few tiny spots of blood into a tissue.

Freddie’s death is left out of the film, as it culminates with the band’s legendary Live Aid performance. Whether this is a positive or negative is purely down to the individual viewer. Some would argue that the film is a celebration of the life of an icon, not his death, while a more politically-minded audience may criticise the lack of more realistic and thorough exploration of the true impact AIDS had on Freddie in his final years. It would’ve been a great opportunity to bring both HIV and AIDS – which still affect millions around the world – back into the minds of a mainstream audience. Ultimately, Bohemian Rhapsody is a film told through the eyes of remaining band members Brian May and Roger Taylor, who both served as creative consultants for the filmmaking process, and it’s worth remembering that. If a celebration of Queen, the endearing queerness of Freddie, and their stratospheric impact on the world of music is what you’re after, it succeeds wholeheartedly. But if you’re looking for an honest, warts-and-all biopic of one of the biggest LGBTQ icons of all time, you’ll leave slightly disappointed.

Bohemian Rhapsody is out in cinemas now.