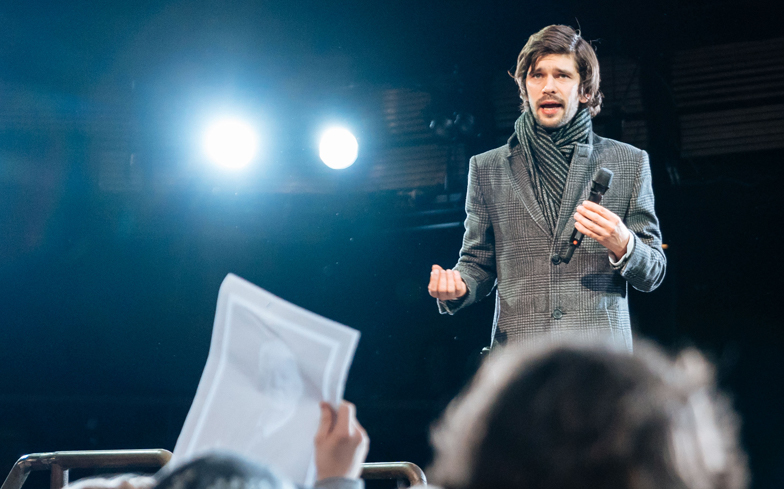 A poignant reflection on the rapid succession of dictatorship, and the perils of those who choose to rebel.

Julius Caesar is one of Shakespeare’s more gritty tragedies, and Nicholas Hytner hasn’t shied away from this title in his modern clothes production at The Bridge Theatre. While the dialogue remains Shakespearean, the parallels with our current reality are blatant immediately as we enter the theatre.

Being shown into The Pit, the standing spectators are jostled about to the tune of modern rock while beer, popcorn and familiar red caps with the word CAESAR emblazoned across them in characteristicly white writing are sold to punters. The result is an immersive and jarring experience for we on the ground, who find ourselves cheering for Caesar before he even enters the stage.

Because it’s a Shakespeare Tragedy, there’s no real need to mention the plot (spoiler alert: everyone dies), so instead we focus our attention to the production. The all-star cast deliver standout performances; commanding the spotlight even when delivering their lines from within the mob of standing spectators. Ben Whishaw shines as Brutus, the idealistic political theorist whose notions of utopian democracy crumble as they’re applied to the bloody streets of Rome.

The fluxing stage keeps standing viewers on their toes as we’re manhandled from corner to corner by the cast – no small feat when you consider that it’s a group of grumpy Londoners they’re dealing with. This does, however, have its drawbacks. About 20 minutes into the performance, there is a storm scene – excellently choreographed, the ground rumbles and the speakers boom, all the while strobe lighting scatters the crowd into chaos. Our only criticism is that the room for human error in these moments seems almost dangerously large.

The modernisation of all but the language gels well; where Shakespeare intended Caesar to be stabbed by his conspirators, he’s instead shot, with graphic and convincing visual effects accompanying to ensure an unsettling finality to his death. We in the audience become the citizens of Rome, encouraged in our response to Caesar’s murder by well-placed cast members dotted throughout The Pit. Again, the result is confronting as we realise how swayed to political discourse we are based on who demands our attention for the longest.

Overall, the production of Julius Caesar displays the timelessness of dictatorship and man’s quest for power through the modern lens of Trump’s America, and is not to be missed.