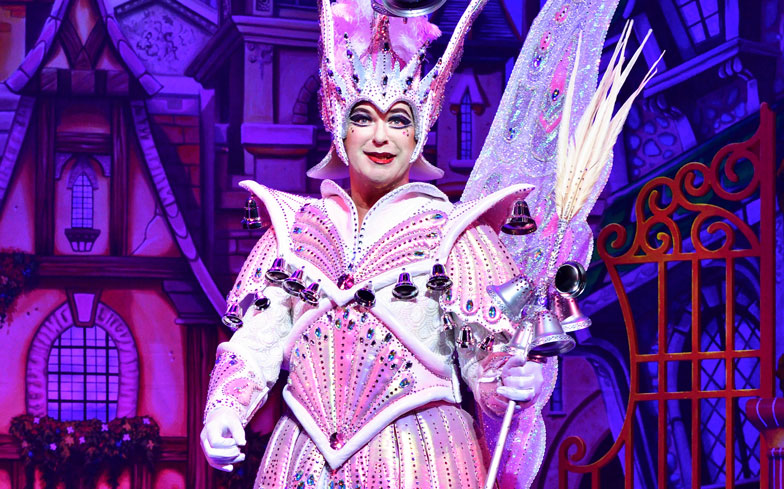 Pantomime has returned to the world-famous London Palladium this Christmas – and what a show it is!

Those of you that are regularl readers of ours will know that the 2016 production of Cinderella at the Palladium ended up being a total Gay Times favourite for the year. Packed with Paul O’Grady and Julian Clary as its two wickedly camp drag sisters, there was everything we’d ever wanted in one show.

So naturally, our expectations were high for this year. Although he’s without his trusted (and evil) friend in Paul, Julian makes our trip to Dick Whittington every inch (behave!) the show we wanted it to be – but he didn’t do it all on his own.

The First Lady of Musical Theatre Elaine Paige – or ET as Julian brilliantly calls her throughout – serves up parodies of songs that’ve become somewhat signature to her career. Continually poking fun at herself as baddie Queen Rat, there’s a likeable and loveable feature to Elaine that, even when causing all kinds of havoc on stage – you just can’t help but cheer on.

And just wait until you see what she wears. That Evita dress has nothing on ET, sorry EP, with a rats tail.

With pantomine and the Palladium, the set and spectacle has become as signature as the building – and this year delivers all expectations in a beautifully packaged way. Think a flying bus, boat and even a horribly large rat. There’s also costumes galore that sparkle in the most fabulous of ways, although Julian clearly gets most of the costume budget as Spirit of the Bells.

West End – and soon-to-be Broadway – star Charlie Stemp is our handsome and rather playful leading man, although the poor guy does have most of the Dick jokes sent his way. It’s a panto with a rude word in the title, you can just imagine the levels of filth we end up with.

Oh… and speaking of filth, we must talk about Julian and Elaine’s dialogue and song in act two. With more Dick jokes than even with could take – again, behave! – theres a parody upon parodies served when the stage stars take on I Know Him So Well. Yes, you can experience Elaine Paige singing I Know Him So Well live this festive season, just don’t try singing along as you probably don’t know this set of lyrics!

Nigel Havers provides wonderful laughs as his part of Captain Nigel grows somewhat bigger this year; much to the opening night audiences’ enjoyment. Gary Wilmot of equal success in drag as Sarah the Cook. His routine of London Underground stations a clear audience favourite, and so it should be as it’s bloody impressive!

Ashley Banjo (The Sultan) and Diversity (The Sultan’s Special Advisors), although sadly underused, turn it out with dances that’ll leave you begging for more, while Emma Williams makes a beautiful and rather hilarious Alice Fitzwarren. Paul Zerdin as Idle Jack and his trusted sidekick will also leave you screaming with laughter as his ventriloquism act hits all the right spots again this year.

Although it lives slightly in the shadows of the success of Cinderella last year – bring back Paul O’Grady in 2018 when panto is promised to return to the Palladium once again – Qdos have delivered the most ideal of Christmas treats once again. Naughty but oh so nice, believe in Dick – see, the jokes just write themselves – and head off on a magical adventure via the stunning London Palladium.