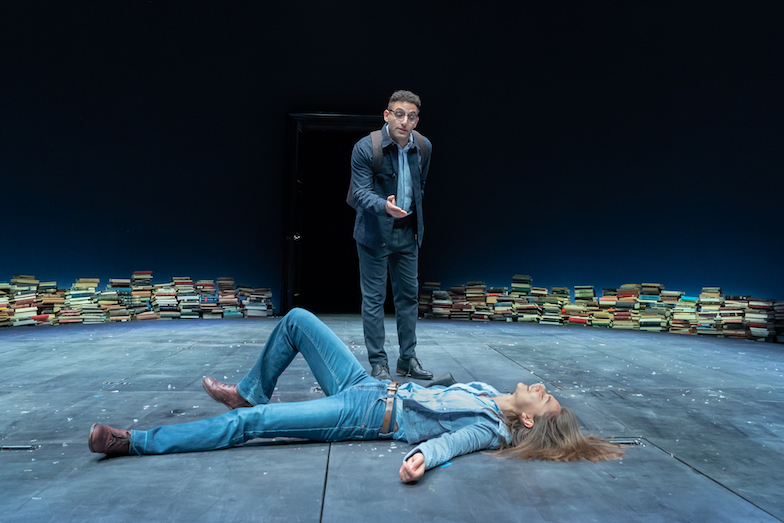 Howard Brenton’s contemporary reimagination of Jude the Obscure has opened at the Hampstead Theatre, directed by Edward Hall.

Loosely based on the events of Thomas Hardy’s classic novel, this new stage version sees Jude become Judith, a gifted and intelligent Syrian refugee who longs to study at Oxford University. When we first meet Jude, she is about to be fired from her cleaning job for attempting to steal a copy of Euripides. When Jude is able to translate the ancient Greek on the spot her employer Sally, a teacher, has a change of heart and instead offers Jude tuition so she can sit her A levels and hopefully take a step closer to achieving her academic aspirations.

It’s certainly an ambitious play – an awful lot of themes are explored over the course of a little more than two hours. We rather felt it had bitten off more than it could chew in an attempt to tackle far too many serious issues at the same time. The Syrian refugee crisis? Islam and radicalisation? Diversity in education and its effect on social mobility? Institutionalised racism? It’s all present and correct, and unfortunately rather muddled.

The play had some redeeming features, but we felt that for everything it got right, it managed to get something else spectacularly wrong. There were some impressive performances – Emily Taaffe as teacher Sally was believable, while Caroline Loncq as Oxford don Deirdre entertained with witty one-liners and expert delivery. But a handful of scenes were marred by stilted and wooden delivery. Visually it was a complete mixed bag, too; the snow effect was aesthetically pleasing, but contrasted sharply with some incredibly unconvincing fake blood used in the same scene.

There were a handful of decisions which we thought were frankly bizarre, too. Most ill-advised of all was the regular appearance of the ghost of Euripides, complete with a Geordie accent, for some reason. Popping up at unexpected and too-frequent intervals to spout some pseudo-intellectual dialogue, he awkwardly overstayed his welcome throughout.

Jude isn’t a complete disaster – there are some impressive moments of acting and some stylish visual effects, while it also tackles some important and topical issues. Unfortunately it’s rather overambitious and some of the production is flawed, resulting in a confused, muddled and disappointing retelling of Hardy’s novel.