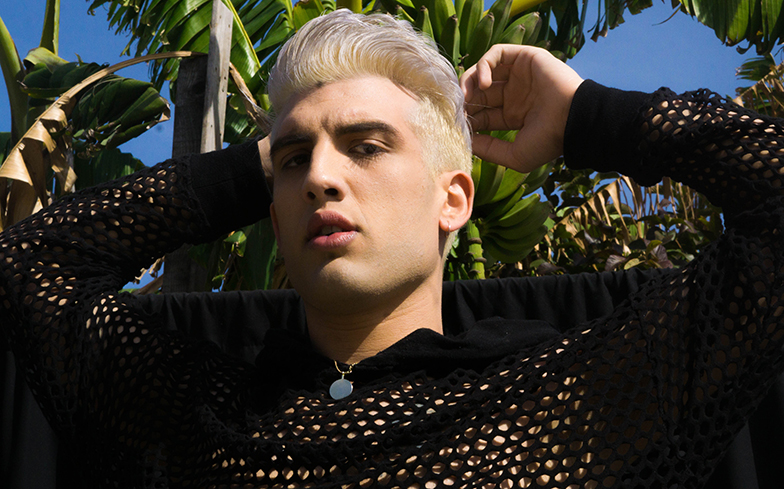 Jorgie’s audition for American Idol was more than your standard pop-star-wannabe fare.

As he appeared in front of a lineup of judges featuring Lionel Richie and pop superstar Katy Perry, who he credits as one of his biggest inspirations, he essentially came out to the world – including his family back home in Israel – in the process.

“I had panic attacks,” he recalls of the weeks leading up to the audition airing on TV. While his father has “cut [him] off” since, Jorgie tells Gay Times he wants to use his voice to provide representation for other queer people living in the Middle East.

As he releases his new single Heaven, the original song he performed on Idol, we spoke to Jorgie about his plans for the future, what it was like meeting his idol Katy Perry, and how we can best fight against anti-LGBTQ laws around the world.

What inspired you to come out to the world?
I’m an artist, so I love to express myself vibrantly and to experiment with fashion, but growing up I was always told to wear masculine clothes and to conform to gender norms. I’ve written many love songs, and felt that in order to produce these songs I had to change the pronouns to female, but I realised that would be untruthful to myself and my fans. It’s also heart-wrenching to see injustice in the world against LGBTQ people. To be silent is to be complicit. Eventually, courage takes over and you take a leap to come out. Were you nervous to share such a personal story on a massive television show?
Immensely. I had panic attacks for weeks on end before the episode premiered, brought on by vivid imaginations about people’s reactions back home, and about my parents. I knew I had a great support system here in the US, but I felt that my community back home would reject me. Some nights I deeply regretted it and wanted to beg the studio not to air it. I prepared for shame, disappointment, total estrangement. But being able to connect coming out with my music was the only way I could do it.

You got praise from Katy Perry, which is incredible. What was it like meeting her?
It was an out-of-body experience. But once I started singing, I calmed down. I’ve been a huge fan for years. In real life, she is warm, welcoming, and drop dead gorgeous!

What has the response been like since you appeared on American Idol?
Everything from love, praise and support, to criticism and aggression. I’ve heard from total strangers how much they loved my audition, my story, my song. But my family is a totally different story. Right now only my mom talks to me. My dad and brothers have cut me off. They have a very different view about gay people. It’s very misunderstood, and coming out is treated like a crime. They get asked by others, ‘How could your son do that to you?’ I know my parents love me, but this is bigger than them – culture, religion, tradition. I hope they can come around soon.

LGBTQ rights in the Middle East aren’t great. What do you think we can do to change negative views and laws in countries that criminalise queer people?
Hit them where it hurts. Money can be more powerful than voting and protesting. We can boycott. We can show them that we will not frequent any establishment that condones this vile threat against humanity. We also need more visibility – more Middle Eastern LGBTQ people in the media, more conversations, panel discussions, songs, films, plays, TV shows – to give hope to LGBTQ people in those countries that they too can shed shame. As someone from the Middle East, was it important for you to be openly gay on a television show and represent that community?
Yes. Queer people in Morocco, Iran, Lebanon, Turkey, Israel, Portugal and the Philippines have sent me messages saying they feel safe coming out to me. They’ve shared stories of their relationships, their parents, and how they want to leave and make a better lives for themselves. My community may not accept it, but I have hope that they can believe that I am not a ‘harmful degenerate’. I can be happy and successful. I can uplift society with my music. I can give hope to people. I don’t want to hurt anyone. The culture has such a rich, beautiful, sophisticated history, and I refuse to believe it is incapable of change for the better and for the future.

Are you working on an album or an EP?
Yes! By popular demand I released Heaven, the same original song I sang on American Idol. I’ve gotten hundreds of messages and comments begging me to release it. Right now I am a completely independent artist with no budget. It requires tons of hard work and dedication, but I am committed. I’m planning many live engagements this summer at Pride festivals, as well as compiling my original music into my debut EP. It will include a mix of pop and dance anthems and heartfelt ballads.