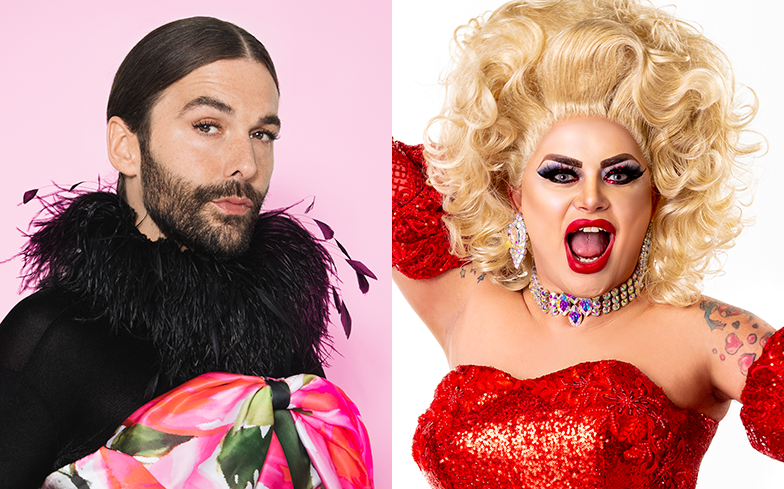 Since RuPaul’s Drag Race UK first aired, the show has attracted fans from across the globe asking, ‘What the hell are they saying?’

The British accents mixed in with our vast and rather varied phrases mean there’s been a hilarious amount of confusion over these classic UK sayings.

Baga Chipz is the gift that keeps giving, The Vivienne isn’t taking any prisoners, and Cheryl Hole is… well, just Cheryl Hole. And we love them all!

Known for his iconic sayings and hilariously addictive personality, we asked Queer Eye’s resident superstar, Jonathan Van Ness, to explain what he thinks some the British words and catchphrases mean… with hilarious results!

Tuppence.
Tuppence? Erm… is it a shoe? No. Balls? Butt? Breast? A vagina.

Correct, when you go crazy!
I knew that one, yes!

Chav.
Like a man? A bro? Jersey Shore but here in Britain? Like really Love Island style. I love that!

Prince Albert.
That’s a piercing in your pee hole.

It’s a ball on face vibe.
I think your mouth is the tea. Why do you want to put your ball sack on my eyes? Y’know, what’s the point?

Somebody that’s loud and quite rude. They talk a lot.
I could be a gobshite, I feel like I talk… a lot!

You’re too nice to be one.
Are you sure? Okay, phew!

On the piss.
You’re just a nightmare. You’re takin the piss?

Prune.
That face you make when you’re taking a selfie. It’s the name Mary-Kate and Ashley Olsen when they take a selfie.

Car boot.
The thing that makes your car not move when you have too many tickets?

Like the back of your car. A car boot sale. What about maypole?
Oh I don’t know!!!

Dressing up and dancing around a pole with ribbons coming off it.
Oh. That sounds fun, It sounds outlander-ish.

No. It’s not the best word for somebody who is perhaps past it. It’s not all that cute.
Ew.

Jonathan’s book Over The Top is available now.