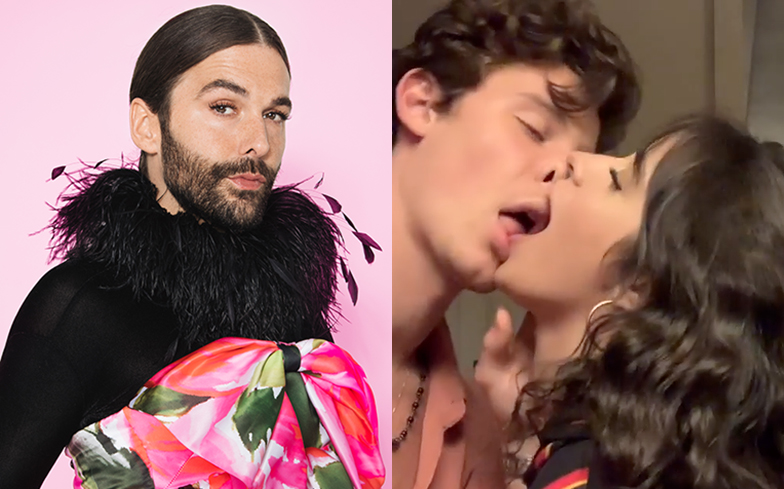 Jonathan Van Ness continues to be our favourite on Twitter.

In the clip, the two singers explain that criticism on social media about the way they kiss has “hurt our feelings” and so they decided to show off how they “really kiss” – although like most of the internet, we’re hoping it’s a joke.

If you’re one of the lucky ones who hasn’t seen the video yet, you can watch it below.

The video sent the internet on fire, with many people saying they wish they could “unsee” the video, but Jonathan took the opportunity to joke about his pretend relationship with Queer Eye star Antoni Porowski (or perhaps throw shade?).

“Also how Antoni & I like to kiss,” he wrote as he retweeted the video. Now there’s a kiss we’d like to see.

Jonathan and Antoni, the resident grooming and cooking experts on Netflix’s hit makeover show Queer Eye, have been teasing followers about a potential romance for a long time now – they even have a shared Instagram account.

While fans were elated at the thought of two of their favourite celebs dating, both Jonathan has since clarified to GAY TIMES that they are not in a relationship, and that their shared Instagram account is meant to be satirical.

“It’s a total joke. It’s like obviously a total joke,” he told us in his new cover interview. “But I do think that Antoni could potentially, like accidentally, trick himself into falling in love with me… which I think has probably already happened.”

He continued: “I love him so much. And he does all the functional things of a boyfriend that I would ever need, honey. Like, if the shit really hits the fan.

“And I don’t ever have to have sex, but I get to do all the fun stuff that a boyfriend would get to do – help me during a tragedy, carry a bag, open doors, but I can also just like eat 17 gallons of cheese dip and then be like, ‘Bye!’

“Which is to me, I think, one of the most rewarding friendships I’ve ever even thought about having.”

You can read Jonathan’s full interview in the new issue of GAY TIMES here.