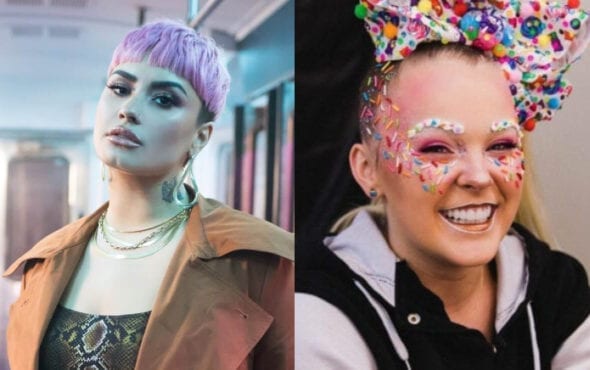 Social media star JoJo Siwa opened up about her “gay awakenings” during an interview with Demi Lovato.

During an appearance on their podcast, 4D with Demi Lovato, Siwa revealed that their Cool For The Summer performance helped her realize that she was queer.

“Do you remember your dancer, her name is Jojo Gomez, and you did Cool For The Summer together?” she asked. “I remember seeing that and just being a little too interested.”

Siwa went on to say that her girlfriend Kylie Prew also had a similar experience when she witnessed Lovato performing the critically-acclaimed song.

At the time of its release, fans praised the track for being a queer anthem. Lovato also revealed that the song was created as a way to come out as bisexual.

“When I did Cool For The Summer, that song for me was actually my way of sharing with the world without confirming that I was bisexual,” they explained.

“I’m so happy that you could see a little glimpse of that Pride through that performance.”

On January 20, Siwa posted a Tik Tok video that featured her dancing along to Gaga’s hit track Born This Way, seemingly confirming her sexuality.

Since posting that iconic video, the former Dance Moms star has continued to open up about her sexuality.

Earlier this year, she came out as pansexual during an interview with People Magazine.

Demi Lovato says they are “understanding” of people misusing pronouns

Later in the interview, Siwa discussed her relationship with her girlfriend Kylie and their transition from being friends to being a couple.

“It was really hard. I knew that once I saw her, I was like ‘Wow she’s like really pretty and I really like her,'” she explained.

“But I was just thinking like a friend… and then as we became best friends I was like ‘Hmmm I don’t think it’s that.”

Siwa went on to say that during Christmas break she couldn’t hide her feelings for Kylie any longer.

“She said that right then that she knew it was her and that she had a crush on me… but I was like I couldn’t tell her because she’s my best friend.

Siwa ended her answer on a positive note, revealing that the two opened up about their true feelings for each other soon after their initial talk.

Watch their full interview here or below.