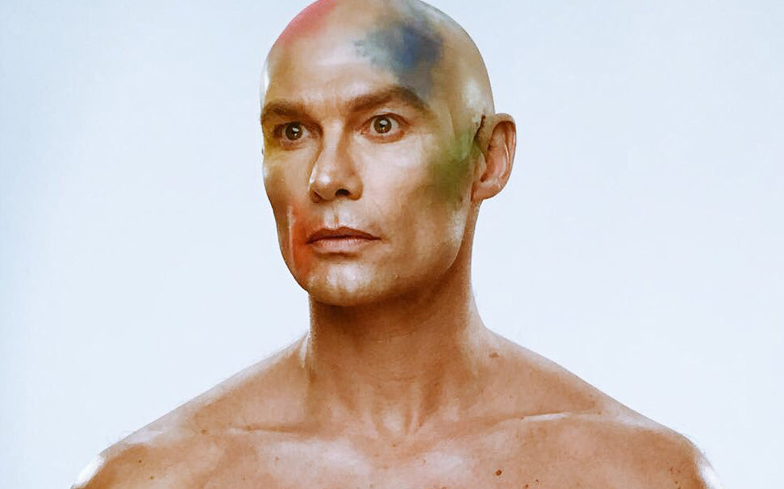 Best known for his turn as Christian Clarke in BBC soap EastEnders, before he rocked up to Albert Square in 2008, John Partridge was an accomplished dancer and actor in many of West End’s biggest shows.

Following his exit from Enders he returned to musicals, before a stint in the Celebrity Big Brother house in early 2016.

For his latest project, Johnny is re-introducing himself in his new self-written production, STRIPPED.

Gay Times caught up with the star to discuss his reasons for this new beginning, what fans can expect from the show, as well as reflecting on the impact his gay storylines in EastEnders had, and if gay actors still struggle to be cast in straight roles.

You’ve described STRIPPED as a “re-introduction” of yourself to the public – why have you decided that now is the time for you to do that?
2017 was a without doubt a defining year for me, for a number of reasons. I experienced amazing highs and crushing lows, both professionally and personally. As summer came to a close I was exhausted. Emotionally, mentally, and physically. I’d been touring for two years with two productions, I’d lost my mother and I felt as though I was about to lose my mind. I knew I had to make changes to my lifestyle, but I was weak and it has always been easier for me to “paint a face on” than be real. However little by little, day by day it was taking longer to get ready for the party… and sometimes I’d be the only person there.

When you are coming up with a show like this, how difficult is it to know how much about yourself to share?
In someways that’s been the easy part. When I decided to do this show, I wasn’t sober… but now that I am, I want to stay that way. So this is my declaration, my union with myself. When you marry you declare your love in public, surrounded by friends and loved ones, you ask them to support you in that union so that you can call upon them if times get tough. That’s what I’m doing now.

Because it’s such a personal show, does it make the whole experience more nerve-wracking?
It’s not just actors who play dress up, everyone does. We all have a public and private persona. I’m getting to know myself again, and that makes me nervous! I’ve never been very good at being honest with myself, or good to myself. I am attempting to do that now.

I have dressed up for a long time. Pretended I was in control, that I was enjoying drinking, using , partying that it was all good fun. That it wasn’t a problem. I made excuses, justified, denied, even lied. Not because I am dishonest, but because I was scared. This wasn’t “pre party jitters” ( a line I used to love to use, no pun intended ) but fear.

So yes, I am nervous about this show, as I am not hiding behind any of that anymore. I am not onstage playing a character or “playing” up to my old “rock n roll” image. Who am I without all of that? When I am stripped bare, exposed in that way, what is left of me? I was nervous about admitting that I have struggled with addictive behaviours..but admitting it has helped me say no to it, and in turn so has this show. How much of this show deals with the impact of fame?
Stripped deals with my past, present and future. It looks at the boy I was, the man I am and the person I hope to be. My life, my inspirations and my heroes, and the impact all of that has had on me and those close to me. As a boy all I ever wanted to do was dance, I was blinkered in my desire and had overwhelming belief in my dream. Nothing was going to stop me from achieving my goal and I was driven. It burned in me both day and night and it worked.

I have said that “life has a way of hardening you,” or at least mine has. I have achieved more than I ever thought possible but I now want to know what else I can achieve … sober. I now have that blinkered belief back I had as a boy.

Fame, profile, celebrity, whatever you want to call it has never been of interest to me. I don’t think it is to most performers that have worked their arses off to get to where they are. However, I am grateful to have a small denomination of it, as like money, it doesn’t make you happy but it can give you choices. So Stripped deals with me…I am finally dealing with me!

How do you take a step back from the spotlight to re-examine who you are?
As I write this I am on a plane to Bangkok. A two day stopover then on to Koh Samui! It has not always easy for my husband and I to find time together to go away as we are both actors and say yes a lot. However, last year was hard on us both and after my mother passed away we booked this trip to have something to look forward to.

It is hard to take a step back when you have responsibilities that mean you need to hustle to keep your head above water. That is something both Jon and I (my husband is also called Jon) had to do. We had to make sacrifices and decisions to be away from each other for long periods of time as I had huge financial commitments as my mother was so ill and needed constant care, which unfortunately in this country is inadequate and/or expensive.

That meant sometimes doing things I didn’t want to do for money. Her passing, painful as that was released me/us from that, and also acted as a catalyst for profound change. Watching the life leave someone has a way of focusing the mind… having now lost both of my parents I suddenly felt incredibly vulnerable and knew it was time. That is not to say I didn’t go down without one last hurrah…or ten.

What’s the biggest challenge you faced when putting this show together?
Keeping it simple. I always want to “bring on the dancing girls” and make it a spectacular! Then I can hide within it. To feel confident that I am enough. That I don’t need costumes, wigs, sets, huge arrangements in order to give a great performance. This is definitely not that. It’s me with piano and guitar and the soundtrack to my life.

Even as I read back over that it makes me anxious. Am I doing the right thing? Am I enough…? You see sometimes the more successful you are the more insecure become. In the past I would have found away to numb those feelings, but now I want to be able to feel them, to harness them. I want to know I am enough. EastEnders recently walked away with a Gay Times Honour for their continued representation of LGBTQ people on mainstream television – during your time on the show, what are your memories of the impact some of your storylines had on viewers?
I enjoyed my time on Eastenders immensely and I will always look back on it with fond memories. It is extremely difficult to tell a gay story at 7:30pm in the evening. It shouldn’t be but it is. So what I am most proud of is that we were able to do that without alienating the audience.

Syed and Christian’s story became one about two people in love in impossible circumstances. Not one about sexuality or religion which really was quite remarkable. It is something I am still asked about today and probably will always be asked about and that, in itself, gives me a great sense of personal pride and achievement.

Most of the time in my house it’s white noise. My sexuality has never defined me. Yes I’m gay, but that has never made me feel I’m any different to anyone else. I’m not sure why that is, it has just never been an issue for me. I’ve never felt like a minority or that I’ve needed to be represented by anyone but myself.

There’s a view that gay actors are largely overlooked when it comes to casting straight roles – as an actor working in the industry, is that true?
In theatre, no, but in television/film sometimes yes, I think that’s true… not all the the time, or by everyone but yes. I do know actors who are not public with their sexuality for that reason. When I first appeared in Eastenders I opened a newspaper to find myself described as “openly gay actor” John Partridge… openly gay? As opposed to what… why? What was the significance of that. Why was the fact I was gay even mentioned? It was something I had never experienced in my 20-year career in the theatre. There I had played a cat, a train, a butcher, a jock, a mod, a rocker, a transvestite, a GI, a toothpaste model, a lover, both straight and gay. On television I’ve played gay…. !

What do you hope people take from STRIPPED?
It is a re invention of myself in many ways. Life has away of hardening you, at least mine has. This is my attempt at shedding those skins. Saying goodbye to part of myself and embracing someone I knew a long time ago. I have spend the last 46 years preparing for this… so I ought to be ready.

Johnny Partridge: STRIPPED will play at The Other Palace theatre in London on 2 and 3 February. You can book tickets here.