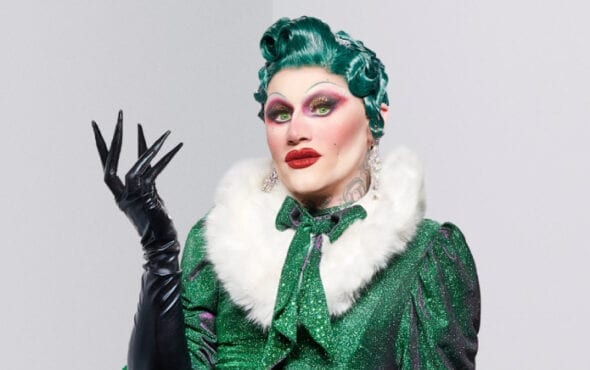 The revered entertainer – who exited the competition in 12th place last week – planned to pay homage to the transgender community in her two ‘Surprise Surprise’ ensembles, which she posted to social media after the episode aired.

In her caption, Joe said it was important for her to “integrate the trans pride colours into the final look as a tribute to those who go through the journey of becoming their authentic selves,” before using the hashtag: #transisbeautiful.

The Brighton-born performer also addressed the “cost related elephant in the room” that comes with competing on the series.

“Drag Race has a culture surrounding it of looking and being the most expensive thing in the room,” she told her followers.

“In reality, that just isn’t possible for most people. Myself included. So this look was formed around a vintage dress I had got on the cheap (£6.66 in a halloween clearance sale at @beyondretro to be exact!) – which is the pink Art Deco inspired dress in the butterfly reveal.”

Joe continued to explain of her look: “Then everything was built around that to make use of things I already had. Faux fur made from fabric scraps puzzled together. As were the tassel trims and stones used.”

You can check out Joe’s fierce planned looks for this week’s episode of Drag Race UK below.

Joe’s elimination at the hands of Bimini Bon Boulash has been deemed one of the most controversial eliminations in Drag Race history. There’s even a change.org petition (!).

When we spoke to the star after her exit, she told us: “I just stood there smiling like, ‘Mmm hmm. Mmm hmm. I don’t agree with this necessarily, but smile smile smile.’

“Obviously, it’s about the queens and the show, but it’s also about the audience and how the audience reads things. The audience, from what I’ve seen online, very much disagreed with them as well! The audience are the ones to react to this, and they’ve made their feelings clear!”

She continued: “Michelle Visage is apparently, I’ve been told on Twitter, no longer welcome in Brighton!”

You can read our entire interview with Joe Black here.