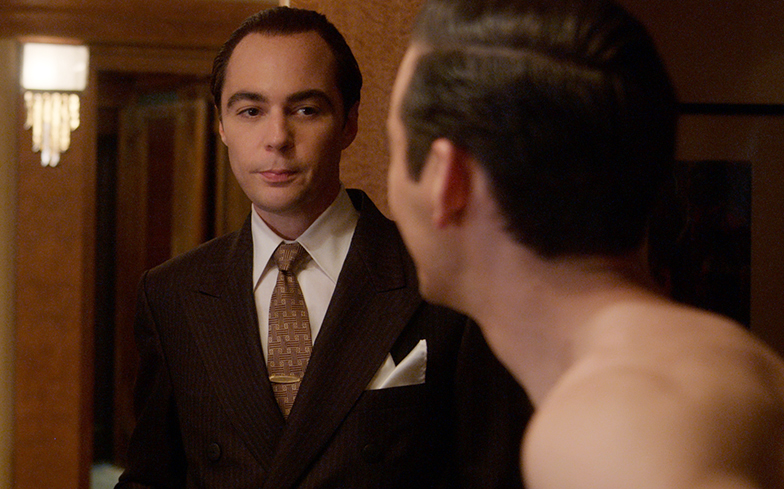 Jim Parsons has opened up about his experience filming Hollywood.

The new Netflix drama from TV mastermind Ryan Murphy follows a group of aspiring actors and filmmakers as they try to make it in Hollywood’s Golden Age while tackling biases across race, gender and sexuality that continue to this day.

As is typically the case with a Ryan Murphy show, there’s also an incredibly attractive cast and plenty of boundary-pushing moments, including a lot of male nudity – something we still don’t often see on our screens.

During an appearance on The Ellen Show, out actor and Hollywood star Jim Parsons spoke about one specific scene involving a swimming pool at a party that he found “really awkward and shocking at first” because of all the naked extras around him.

“I mean, I’ve gone to a lot of gay clubs in my time, and I’ve never seen that many naked people at once, ever. Well, I mean, I don’t think that’s legal in most places,” he said.

“But it was really awkward and shocking at first, we were surrounded by so many naked people, and I just kept trying not to look, but there really came a point – I mean, it was hours we were doing this – where I stopped not trying to look at some points.

“I was just like, you know what? What I really feel is admiration, to have that kind of relationship with your body that you’re able to just walk around naked in front of the huge crew, and all these other actors and everything, in and out of the swimming pool, I was like, ‘I am in awe’. That is the healthiest, I think, type of [attitude].

“Now, I want to add, there wasn’t a bad looking one in the bunch, so they worked for that confidence – or they were born with it, I don’t know.”

In the new series, Jim Parsons plays Hollywood talent agent Henry Wilson, who was responsible for launching the careers of many big-screen stars including Rock Hudson – portrayed here by Jake Picking.

“Hollywood is a seven-episode period piece set in 1940s Hollywood, and about midway through, fact starts turning more into fantasy, and it’s really a show about some ‘what if’s – what if certain decisions have been made?,” he explained.

“I don’t want to give too much away, but it’s just about choices that weren’t made at the time due to skin colour and sexuality and things like that.

“These characters make some different choices and it sort of begs the question, what would have happened, what would life be like now had Hollywood done things like this 80 years ago?”

Hollywood begins streaming on Netflix on 1 May.