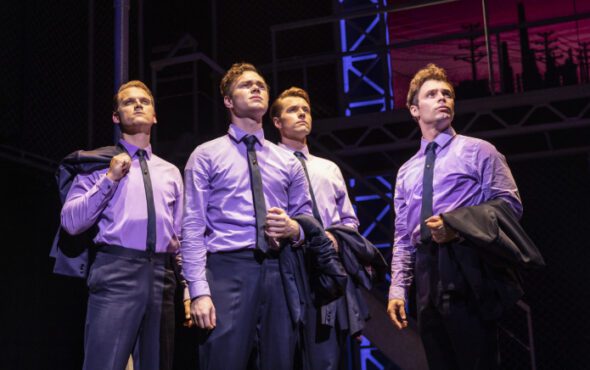 The jukebox musical, based on the story of Frankie Valli and the Four Seasons, is the first show to open at the refurbished Trafalgar Theatre, directed by Des McAnuff.

If you’re not a fan of the Four Seasons, never fear – their back catalogue is so ubiquitous that you’re guaranteed to know many of the songs in this musical. Jersey Boys tells the story of the band – the highs, the lows, the bust ups, the addiction, the incarcerations – over the course of their career, from early beginnings singing on street corners through to their induction into the Rock ’n’ Roll Hall of Fame.

Given the nature of some of this material, we were surprised the show wasn’t harder hitting – these guys went through some seriously dark times, but the prevailing mood is one of lighthearted musical entertainment. Still, it’s a perfectly pleasant way to spend an evening and features some terrific performances.

Ben Joyce – who only graduated from drama school this summer – takes the lead role of Frankie, and does a cracking job of replicating that signature falsetto. The other members of the quartet – Tommy De Vito (Benjamin Yates), Bob Gaudio (Adam Bailey) and Nick Massi (Karl James Wilson) all represent their respective characters convincingly, and their voices sound great together.

We felt there was an imbalance in the two acts – before the interval things moved gradually and there were an awful lot more songs. The second act – shorter, punchier and containing most of their biggest hits – was much more enjoyable to watch. Of course we can’t rewrite history – a lot of the most well-known material did arrive later in their career – but a little edit to act one wouldn’t have gone amiss.

How much you enjoy Jersey Boys will likely depend on how big a fan you are of Frankie Valli and the Four Seasons. Those who adore them can almost certainly add another mark to the score below – but even for those with limited knowledge of the group, it’s still an enjoyable evening. The Trafalgar Theatre has recently been restored to its former Art Deco glory – if you’re looking for an excuse to check it out, this is a perfectly good reason to pop down.