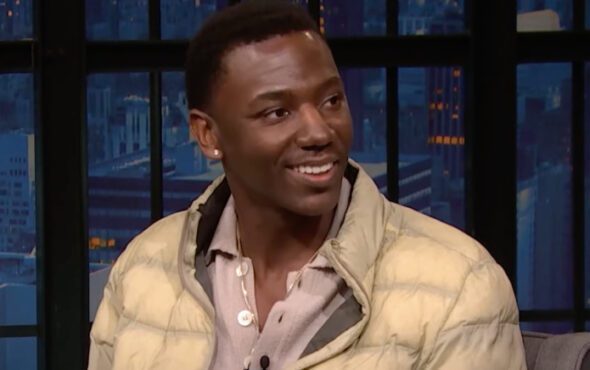 Comedian Jerrod Carmichael has opened up about his family’s reaction to his coming out in a new interview.

On 1 April, the 35-year-old released his stand up comedy special, Rothaniel.

Alongside the batch of hilarious jokes, Carmichael publicly came out as gay during the intimate special.

“After that was out in the open, I was left alone feeling like a liar, because I had a secret,” he told the crowd. “One that I kept from my father, my mother, my family, my friends, and you. Professionally, personally. And the secret is that I’m gay.”

“I thought I’d never, ever come out,” Carmichael continued. “At many points I thought I’d rather die than confront the truth of that, to actually say it to people. Because I know it changes some people’s perceptions of me. I can’t control that.”

In a recent interview with Seth Meyers, the former SNL host gave insight into his family’s reaction to his sexuality.

“My mom practices a lot of cognitive dissonance with it, or denial rather, so I have to come out every other conversation,” he revealed.

He then opened up about the recent conversation he had with his mother in regards to the critically-acclaimed comedy special.

“I was nervous because it was a lot, in the special, a lot of things that I was afraid to say to her. So she called,” he said.

A post shared by Late Night with Seth Meyers (@latenightseth)

“My family can be very polite and we can smile… through things and not talk about things. There’s a lot of elephants in the room. I think my family lives inside an elephant. I think the elephant is the room.”

Carmichael went on to say that the call ended up being an “emotional” one that was “almost very nice.”

“It was very dramatic… It was almost very nice until my mom said, ‘These sins are tearing the family apart,'” he explained.

“It just speaks to the kind of the core of the problem, you know that there’s this insurmountable mountain that we can’t really get over.”

Even though his current relationship with his mother is rocky, the Neighbors 2 star revealed that he’s in a better place with his father.

“I got a really great text from my dad. He apologized for a lot of the chaos, like, ‘I’m sorry for the chaos.’ My dad speaks very dramatically. It’s nice, though,” he said.

Elsewhere in the interview, Carmichael talked about the hilarious reception he’s received in New York since coming out.

“I keep saying I’m gay in New York and people keep clapping and it’s so nice, but it’s like alright,” he joked. “Y’all are just building me up and I can’t… It’s very kind. I’m learning how to receive love and I actually needed that.”

You can watch his full interview with Seth Meyers below.