Jay Versace interview: “I want to be free of sexuality and not boxed in as a guy who’s gay” 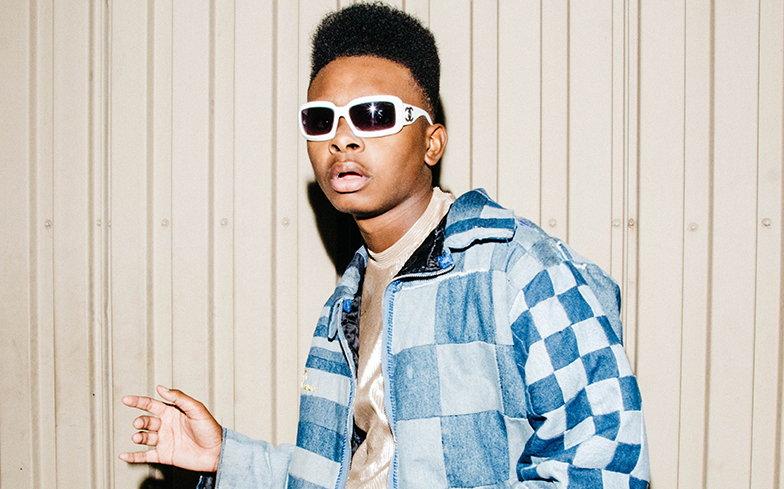 “I’m from South Jersey and I grew up with my mum, my step-dad and brother. My life was just school. I was known as the class clown at the time,” comedian and social media star Jay Versace tells me when we connect on a transatlantic call.

I’m sat in the cold on some steps in Notting Hill whilst Jay is fresh out of bed in the sizzling state of California – who feels like the clown now!

For those that don’t have the internet and therefore are unfamiliar with Jay Versace, he’s the 19-year-old openly gay comedian who has, for want of a better phrase, broke the internet. His much-discussed Vine channel ‘therealversace’ has clocked up some 3 million followers and over 2 billion – yes, billion – Vine views, and all thanks to his amazingly animated facial expressions. But the Insta icon comes from humble beginnings, helming from a black Christian family who helped to run their local church. “I grew up literally a couple houses down from my church,” he tells me, “It was our family church that we basically took over and owned. Every Sunday you’d find me there; it was pretty much my whole life.”

Despite his regimented, religious upbringing, he was undeniably a bit of tearaway, moving between elementary schools as a result of being kicked out for his self-confessed “crazy” behavior. His short online videos acted as the catalyst for him discovering who he really was – and despite their tongue-in-cheek silliness, they quietly document his coming of age. “When I started making videos, people kept telling me to make more and while I was making those videos I began to find out who I was,” he explains. “There were times when certain people at my church were like, ‘what is he doing? Is he crazy?’ and within a couple of months of making content, I stopped going to church altogether. I couldn’t understand why you’d judge someone for not being like everybody else, and if I carried on at church I felt like people would convince me to be someone that I wasn’t.” Jay’s early videos call upon inspiration from his own life experiences; whether it’s an impression of a teacher or the recreation of an interaction with his mum, all played out with perfect timing and the most iconic, animated facial expressions for which he has become synonymous. Despite making it seem like plain sailing, it wasn’t easy forging a path as social media star. This was mainly due to the lack of internet and cable that he had in his house, because his mother considered them unnecessary. To post his videos, he’d have to reach his arm out of his bedroom window or go to the bottom of his garden in order to pick up his neighbours WIFI connection.

Thankfully, Jay’s WIFI hijacking meant we got to enjoy his crazy creations. His videos have even caught the attention of some major stars, including Erykah Badu, who reached out after he shared a video lip-syncing to one of her tracks with a towel wrapped around his head. It doesn’t end there; Jay admits he’s regularly recognised when he attends various functions. “I was at my friend’s birthday party at some club and there was a row of celebrities there all just pointing, laughing and smiling because they knew who I was,” he tells. “It’s a crazy feeling because I’ve just been living my life and people respect me.”

Having a huge online following, which includes 4 million combined Instagram and Twitter followers, Jay appreciates the need to use the platform to speak about social injustices. “As a black person, if I didn’t speak my ideas on something it wouldn’t be right,” he explains to us. “Some people are unsure of how to say or do something so they go onto Twitter to see what others are saying, so if I have the resources to speak on something then it’s especially important as a black person to do so.”

Despite the awareness of his influence, Jay admits that he doesn’t always get it right, telling me that regardless of something being an unpopular opinion, he would still have no qualms in sharing it – a testament to his ‘no-fucks-given’ attitude and evidence to his individuality and independent mentality. It’s this matureness which helped him make the move from his hometown of Pleasantville, New Jersey to LA. at the age of 18. “My mum always used to say, ‘until you’re eighteen you’re not grown and can’t do anything’ so I saved money and moved that summer,” he laughs.

Post-Vine, he’s now put his hand to more serious comedy and acting, something which he hopes his move to LA is going to help him with due to there being more opportunities. He’s most recently appeared in his own TV show, Jay Versace Is in The 90s, within which he is struck by lightning and finds himself stuck in a ‘90s bubble’, and he’s had a role in The Commute, a rom-com series which recently won the Writers Guild of America Award for Short Form New Media. “I’m really just trying to take myself seriously. I don’t want to be lazy, so I’m trying to spiritualise myself and get in the mood and going to acting classes,” he voices to us of his transition from Vine icon to small screen star. “Getting advice from my friends who are also actors, watching movies about actors… I just signed to a new agency and they’ve been helping me go to various auditions – it’ll happen eventually, but I’m actually studying acting first.” And despite his foray into the world of “adult acting”, he’s still heavily present on his YouTube channel, where you can see and enjoy updates of his shenanigans and more of those Oscar-worthy facial expressions. At the end of 2016, the 20-year-old took to his YouTube channel to drop a no-nonsense coming out video. Stating that he didn’t want to make it an emotional outpouring, he quite calmly details his fluidity when it comes to dating. “I was in the shower actually and I thought, ‘You know what? After I finish this shower, I’m going to come out’ – it was quite random. I text my mum a long paragraph and that was it, ever since then I was free,” he reveals of his decision to come out. I ask him whether his upbringing had any influence on his decision to be open about his sexuality. He explains, “being that I live in a black Christian family I knew it was going to be hard. I don’t necessarily blame my family for not understanding it. It’s how they grew up and they’re just acting as a product of how they were brought up.”

Admittedly, he had no gay role models growing up as a result of not being exposed to any. Adding that he didn’t even know who Prince was until his late teens and was only familiar with a few other gay kids at school, all of whom were closeted. Despite a lack of queer role models, Jay’s had the ability to focus on himself. “I’ve been looking up to myself lately! I want to be free of sexuality and not boxed in as a guy who’s gay. I don’t want to be known as the gay guy, but I also want to be an ambassador for gay people,” Jay explains. “I never want to be labelled as the gay actor. I just want to be me.”

Upon the end of our conversation, I’m pleasantly taken aback by our interview. Despite his comedic excellence and his notoriety for being totally ridiculous online, our chat is worlds away from what I’d expected. Behind his ultra-jokey Jay Versace persona, there’s a genuinely heart-warming young guy – someone who cares about his queerness, but is at a crossroads deciding between being a spokesperson for his community or saying ‘fuck it, this is just normal’.

It’s easy to forget that all our favourite social media stars have a life away from our timelines, and it’s refreshing to hear about one so rich in social experience and so woke about pretty much everything. Whether you’re here for his videos or for his down-to-earth attitude, Jay Versace is the face of the future.