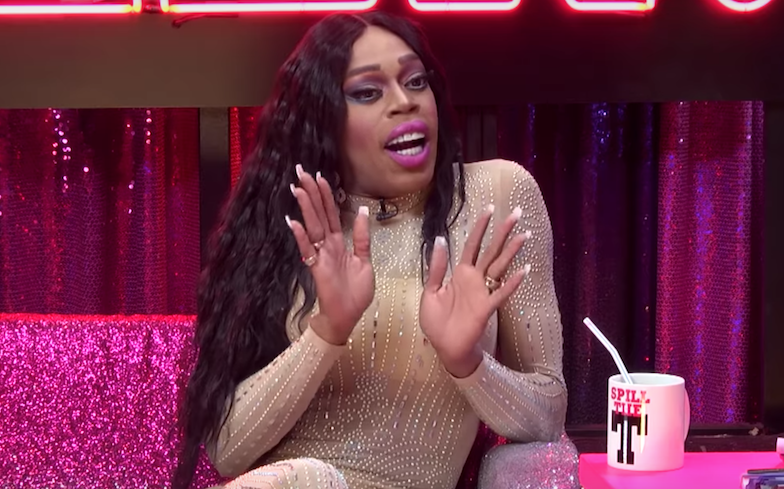 “My feelings got so hurt by her coming at me the way it did, I almost whooped on her.”

In a new interview with Johnny McGovern for Hey Qween, Drag Race icon Jasmine Masters revealed she almost “whooped” a queen when she filmed the series’ Christmas special, Holi-Slay Spectacular.

Last year, the season seven contestant returned to the series for the one-off special with other fan-favourite contestants such as Eureka O’Hara, Kim Chi, Latrice Royale, Mayhem Miller, Shangela, Sonique and Trixie Mattel.

Shortly after the episode aired, fans noticed that Jasmine didn’t have any voiceovers or a confessional scene. She later revealed during an Instagram Live broadcast that she walked off set following frustrations with Shangela.

Talking to McGovern about the incident, she said: “On the second day we was like, ‘Why we still waiting?’ And you know, Shangela was late a lot. First day she was late, second day she was late. And on top of her being late, we also gotta learn this different stuff. “That’s not what I signed up for. I can’t handle that late shit anymore. I just couldn’t. I was ready to go, I wanted to do other things, I had plans, RuPaul just came in and said, ‘Let’s get this shit going, let’s roll.’ And everybody jumped to it.”

Jasmine said she politely confronted Shangela, but her response was “aggressive”.

“I’m like ‘Whoa!'” she continued. “I didn’t expect that from Shangela, because I’ve always been team Shangela. I’ve aways been a supporter of hers and I love her dearly. I think my feelings got so hurt by her coming at me the way it did, I almost whooped on her.

“So I wanted to be like, ‘Okay, before I go in and strangle this person, let me be like, ya’ll got five minutes.’ Five minutes went into 15 more minutes, so I politely just said, ‘I’m gonna go ahead and go, no one’s gonna waste my time anymore. Thank you for having me.'”

Jasmine and the seven other queens jointly won the whole episode, which is available to stream now on Netflix UK. She later returned for the fourth instalment of Drag Race All Stars and placed tenth.

Watch Jasmine speak about her altercation with Shangela below.