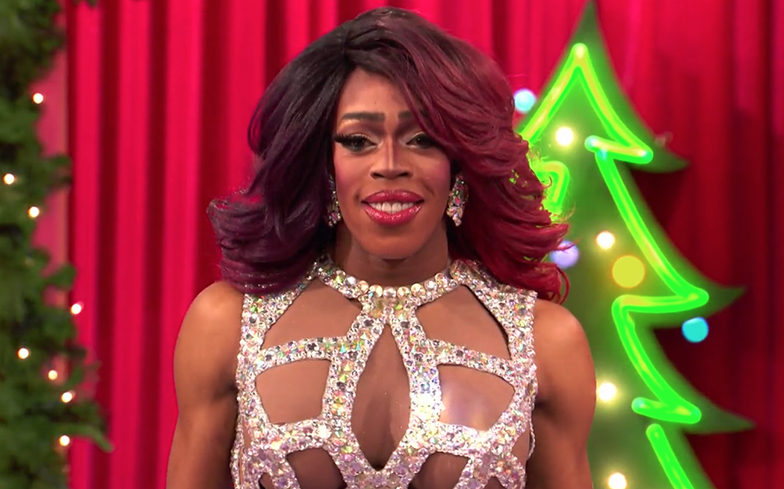 Her name is Jasmine Masters, and she has something to say.

When the RuPaul’s Drag Race Holi-Slay Spectacular aired over the weekend, many viewers were left wondering why fan favourite contestant Jasmine didn’t have any voiceovers or confessional scenes in the episode.

Well, the meme queen herself has now offered up an explanation, revealing during a candid Instagram Live broadcast that she walked off set following frustrations with fellow contestant Shangela.

“They live for Shangela, I don’t breathe Shangela. She’s cool, but when it comes to anybody wasting my time on bullshit, I don’t handle that bullshit politely. I waste my own motherfucking time,” she said.

Jasmine claimed that Shangela was late onto set on multiple occasions, leaving her so frustrated that she packed her bags and walked off the show before the contestants recorded their confessionals and runway commentary. “Everything we had a call time on doing, Shangela’s ass was late. And by that second day, I could not have no more of this girl showing up late, taking 45 minutes extra to get ready, my nerves could not take no more,” she said.

Related: Here’s where you can watch the Drag Race Holi-Slay Spectacular in the UK

Jasmine also addressed the veil she wore over her face during her lip sync, saying she had “sweat [her] makeup off” and didn’t have time to redo her face, but that she didn’t know the lyrics to the song anyway.

“I said fuck it, bitch I didn’t know the words to the Christmas song anyway, so I was like, ‘I’m gonna keep this on, I’m cool, you go up there and sing the song and I’m gonna be the backup’, so I had the chance to be the dancer,” she said.

“I didn’t know the song, and I didn’t have time to learn it, and I was not about to wreck my brain over learning that song.”

You can watch Jasmine’s one-hour-long Instagram Live broadcast below.

Despite her lack of screen time and confessional scenes, viewers were just happy to see Jasmine on their screens once again, with many sharing their thoughts (and memes) on social media.

Y’all, Jasmine Masters really showed up to the HoliSlay Spectacular just to get her check. pic.twitter.com/bjALwxCz3E

I want to start a conspiracy theory that Jasmine Masters left halfway through the competition, so they sent someone else in with that net mask for the rest of filming. #DragRace