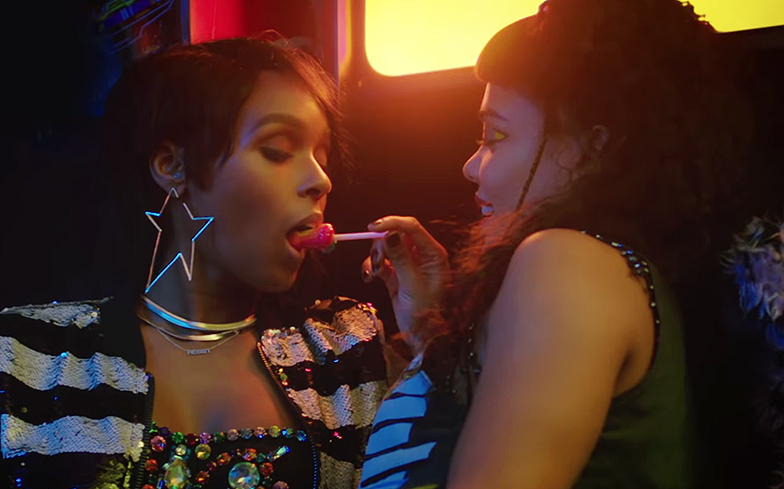 Janelle Monae is back, and she’s here to slay.

It’s been five years since the R&B singer released her critically-acclaimed Electric Lady album, and we’ve been gagging for new music ever since – thankfully, she’s blessed us with not just one, but two comeback singles.

Django Jane is a slick, confident track which sees Janelle rap about race and female empowerment amid scenes of her sitting on a throne (where she belongs, duh) surrounded by a female army in matching suits.

While Django Jane shows off her versatility as an artist, it’s Make Me Feel that’s really caught the world’s attention.

With an infectious beat and an androgynous performance style that pays homage to Prince, it’s sure to become a classic in Janelle’s back catalogue – even better, It’s laced with imagery that alludes to bisexuality.

Throughout the video, Janelle flicks back and forth between the different genders, while one very literal scene sees her run frantically between her male and female love interests, dancing seductively on each one.

Lyrically, Janelle sings of being a “emotional sexual bender” as she makes her way through a nightclub ripped straight of Black Mirror episode San Junipero.

Fans were quick to label the song and video a bisexual anthem, and lauded praise on her.

Janelle Monae just highlighted bisexuality, dropped a fuckin bop, and showed off her hot girlfriend all in one music video.

Iconic. Flawless. My crops are watered my skin iS CLEAR—

While Janelle has refused to define her sexuality, she did describe herself as “sexually liberated” in a recent interview with The Guardian, where she also spoke more about the meaning behind Make Me Feel.

“It’s a celebratory song,” she said. “I hope that comes across. That people feel more free, no matter where they are in their lives, that they feel celebrated.

“Because I’m about women’s empowerment. I’m about agency. I’m about being in control of your narrative and your body.

“That was personal for me to even talk about: to let people know you don’t own or control me and you will not use my image to defame or denounce other women.”

Janelle also announced the release of her fourth studio album, Dirty Computer, which is due out 27 April.