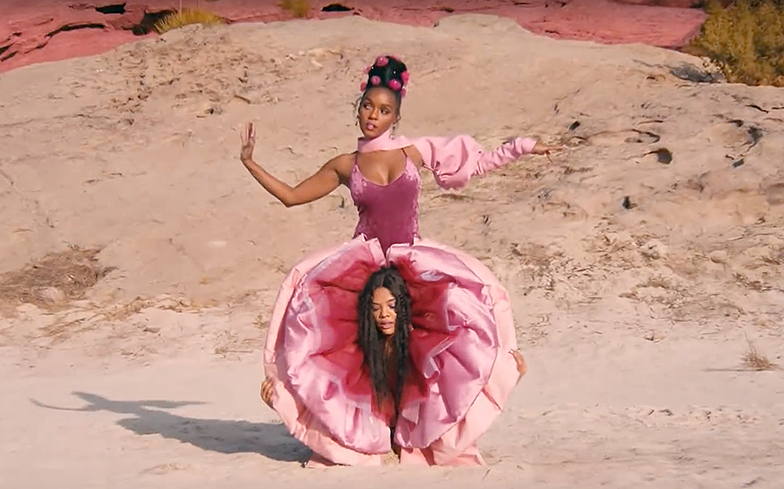 “‘Pynk’ is a brash celebration of creation. self love. sexuality. and pussy power!”

Janelle Monáe has debuted the music video for her brand new single, Pynk, and it’s a queer, feminist masterpiece.

The video – directed by Emma Westenberg – takes place in the desert, with Monáe and several female dancers sporting pink outfits resembling vaginas. Thor: Ragnarok star Tessa Thompson reprises her role as Monáe’s love interest from her previous video – Make Me Feel – with her head appearing between the singer’s “forest and thighs”.

Pynk’s description reads: “‘Pynk’ is a brash celebration of creation. self love. sexuality. and pussy power! Pynk is the color that unites us all, for pink is the color found in the deepest and darkest nooks and crannies of humans everywhere…”

Watch the incredible – soon-to-be-iconic – video below.

Unsurprisingly, the video has gone viral on social media, so we’ve collected some of the best reactions from Twitter below.

Everyone: "omg Make Me Feel is the queerest shit I've ever seen"
Janelle Monae: "lemme hold my own beer"https://t.co/fsFo7Pgh3O pic.twitter.com/uDrWVeHNdg

Literally nothing could convince me that Janelle Monáe and Tessa Thompson aren’t dating and in love. #PYNK

Absolutely loving what Janelle Monáe is doing to recalibrate the sexual politics of modern pop. There's at once ten years and an entire generation separating this from 'I Kissed a Girl'. https://t.co/gE10IB13ak

Pynk is the third single from Monáe’s highly-anticipated third studio album, Dirty Computer, which is due for release 27 April.

It follows her critically-acclaimed funk-jam, Make Me Feel and hip-hop number Django Jane.

Dirty Computer will be her first full-length studio album since Electric Lady in 2013, so when we say ‘highly-anticipated’, we mean it.

Nothing will ever be better than Tessa Thompson standing between the legs of Janelle Monae's vagina trousers in the #PYNK video while Janelle sings: