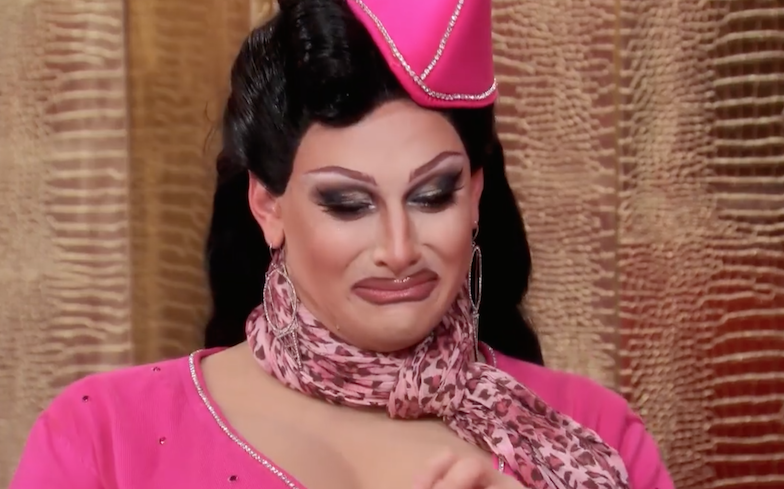 “I want to win a challenge! And I thought that this was going to be the one.”

Jan is feeling down over the events of last week’s RuPaul’s Drag Race in the preview for the next episode.

Following Brita’s elimination, the queens sashay back into the werkroom and read her mirror message, leaving Jan in tears because she considers the legendary performer (who is apparently from New York City) one of her “best” friends in the world.

“It just sucks to see someone that you care about see their dreams stripped away from them,” she admits in her confessional.

The eight remaining contestants then condragulate Gigi Goode on her historic third win of the season, for her performance in the show-stopping Madonna Rusical, before Jackie Cox expresses her shock at Jan being safe.

“I’m frustrated because this is like what I do,” responds an emotional Jan. “I’m a singer, I dance, I perform. That’s my thing. I want to win those challenges. I want to win a challenge! And I thought that this was going to be the one.

“I really wanted that win. I’m frustrated, I’m angry… I’m crushed. The worst part about it is, my best friend just went home.”

In her confessional, Jackie opines that Jan’s emotional state is due to “weeks and weeks of her not breaking through to the judges” and because “neither her or Brita have been able to live up to their reputations.”

The next day, Jan assures viewers that she’s gotten over it. “This morning I feel fine,” she says. “I had a very emotional week last week, maybe the girls see that as a weakness. But bitch, I’m from New York. I get over it, and focus on the next challenge.”

RuPaul then stuns the queens in a quirky Klein Epstein and Parker suit – “It’s all I wear,” he says – before pairing the queens up to curate a box of FabFitFun products for another duo, then gift it to them with shade.

After declaring Jackie and Gigi as the winners, Ru announces this week’s maxi-challenge: to create and market ridiculously extravagant and “totally unnecessary” products for the new drag queen lifestyle brand, Droop.

This week’s episode will see the judging panel debut of disco legend, Chaka Kahn. Watch the preview here or below.