James Corden drama aside, The Prom is the queer celebration we need this year – review 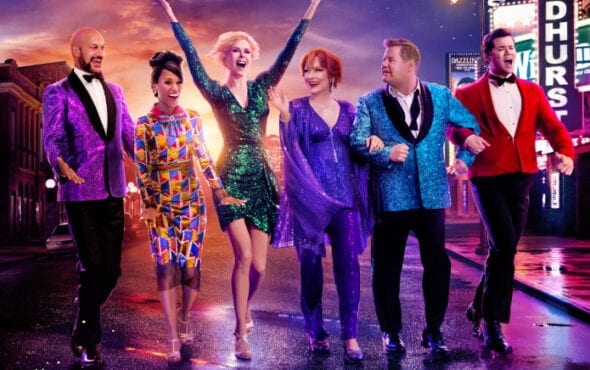 Has there ever been a queerer end to the year?

Unsurprisingly, Ryan Murphy’s Netflix adaptation of The Prom has been bogged down with controversy over the past few weeks due to James Corden’s – in the words of one critic – “gross and offensive” portrayal of a gay man. While we don’t disagree, there’s so much to enjoy here – and Corden, a heterosexual, shouldn’t be the focal talking point in a film that celebrates same-sex romance and acceptance.

Based on the critically-acclaimed Broadway musical of the same name, The Prom follows four struggling actors as they travel to the conservative town of Edgewater, Indiana, to help a lesbian student (Jo Ellen Pellman), who has been banned from bringing her girlfriend (Ariana DeBose) to prom. It’s not as simple as that, however, as their main objective is to repair their scorned public image and renew interest in their flailing careers.

Meryl Streep leads the cast as Dee Dee Allen, a narcissistic Tony Award-winning actress, Nicole Kidman follows suit as Angie Dickinson, a life-long chorus girl craving more, Andrew Rannells as Trent Oliver, a Juilliard-actor-turned-bartender, and Corden as an actor in financial ruin. “We are liberals from Broadway!” they dramatically announce whilst barging into a school meeting, led by Kerry Washington’s conservative Mrs. Greene, who wants to prevent same-sex couples from corrupting the town’s morals. It sets the tone for the kind of film this will be.

To the surprise of no one, Streep is triumphant in the role. Much like her performances as wicked anti-heroes such as Madeline Ashton in Death Becomes Her and Miranda Priestly in The Devil Wears Prada, who aren’t too dissimilar to Dee Dee, the star brings a sense of tenderness and relatability to a character who could’ve easily been one-note. (It’s Not About Me alone should extend Streep’s number of Oscar noms.) While everyone does their best here, Streep is undoubtedly the star in this vehicle and dominates the “ZAZZ!” Kidman sings about later on.

Kidman, who’s earned acclaim in drama-heavy productions over the past half decade – Destroyer, Big Little Lies and The Undoing, to name a few – is here for a jolly time, and invites the audience with her. Theatre veteran Rannells is as reliable as ever and boasts the film’s most addictive (and hilarious) musical number, Love Thy Neighbor, which hits out at those who “cherry pick” the bible. “There’s no way to separate which rules you can violate, let’s hope you don’t masturbate ’cause the scripture says we’ll have to cut off your… hands,” he sings to a mall of conservative teens, plucking away at their preconceived notions of the gospel in the process.

Despite the plethora of industry heavyweights in The Prom, Pellman and Ariana DeBose (in their debut film roles) are the heart of the film as Emma Nolan and Alyssa Greene, the aforementioned lesbians who are banned from being their authentic selves at school. No shade to the other cast members, but their vocals are unmatched, and their romance is what ultimately drives the story forward. While we don’t see their relationship reaching iconic musical couple status as, for example, Sandy and Danny in Grease, or even Gabrielle and Troy in High School Musical, we have no doubt in our minds that Emma and Alyssa will inspire a whole new generation of LGBTQ+ youth.

Performances aside, The Prom is a relentlessly queer ride from start to finish. The songs are infectious, the routines are marvellous, and the message of self-love is more vital than ever. More importantly, the film is a stark reminder for heteronormative audiences that – guess what? – queer people are still being ostracised from their families and rejected by society. Yes, that’s still a thing! In 2020! We’ll admit: it’s corny as hell, and Corden’s casting was a clear misstep, but it’s the queer celebration we need and deserve right now, as well as the perfect closer for a year like 2020.