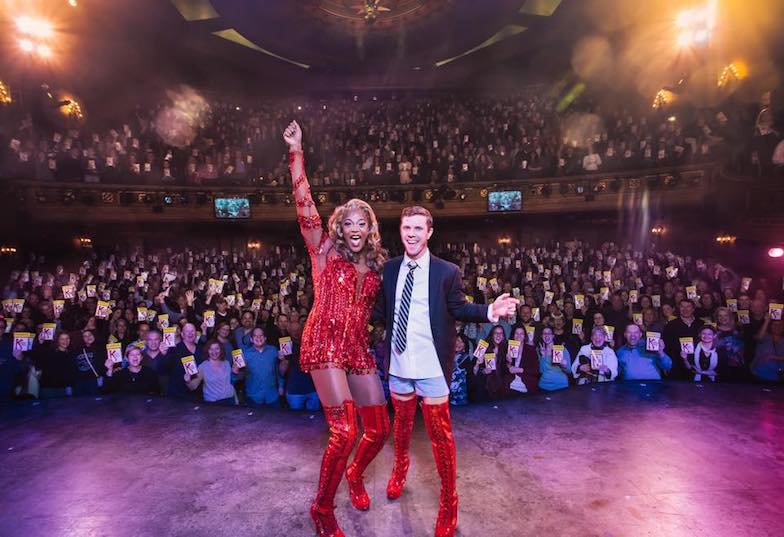 The sex is in the heel…

The campaign to import Jake Shears and his kinky boots from Broadway to the West End starts here. And hopefully the Scissor Sisters star can smuggle Kirstin Maldonado, of acapella group Pentatonix, over in his suitcase. These two big-name additions to the New York cast of the Tony award-winning musical are so good it’s hard to believe they’re both making their Broadway debuts.

Jake plays Charlie Price, a Northampton lad who inherits the family shoe factory, and Kirstin is Lauren, a kooky factory worker who has a secret crush on him. In Harvey Fierstein’s witty adaptation of the 2005 British film (which itself was based on a true story), Charlie meets drag queen Lola on a trip to London and discovers a niche market – high heels for men – that could save the factory’s flagging business.

Lola is the star of the show and he’s currently played on Broadway by Wayne Brady, who first sashayed the stage as the fiercely funny dragster in 2015 and who nails every fantastic Cyndi-Lauper-penned number, every one of Harvey’s razor-sharp quips and every nuance of a character who is both a brazen show-off and a wounded soul.

I’d love to see Jake have a crack at the role, which would suit his flamboyance well, but it’s a testament to his acting talent that he’s able to convince as the sort of average bloke he most certainly isn’t himself. His tough-to-nail East Midlands accent wavers a bit but he sings the hell out of his big songs and has an easy charm. And Kirstin is a comic revelation, truly hilarious as she laments The History Of Wrong Guys in the show’s funniest number.

That East Midlands accent defeats a lot of the American cast (Brady, doing Clacton by way of London, has it easier) and I wish they’d ditch the Nicola character, Charlie’s whingeing girlfriend who, pun intended, is a real drag the way Lola never is. But five years into its Broadway run Kinky Boots remains a show that delivers its message of acceptance and inclusivity in a blast of Hi-NRG fun that’s as irresistible as the two-and-a-half feet of tubular sex that Charlie fashions for his new muse as celebrated in the Everybody Say Yeah showstopper.

Jake’s in it until April 1st, then the West End maybe? Everybody say Hell, Yeah!