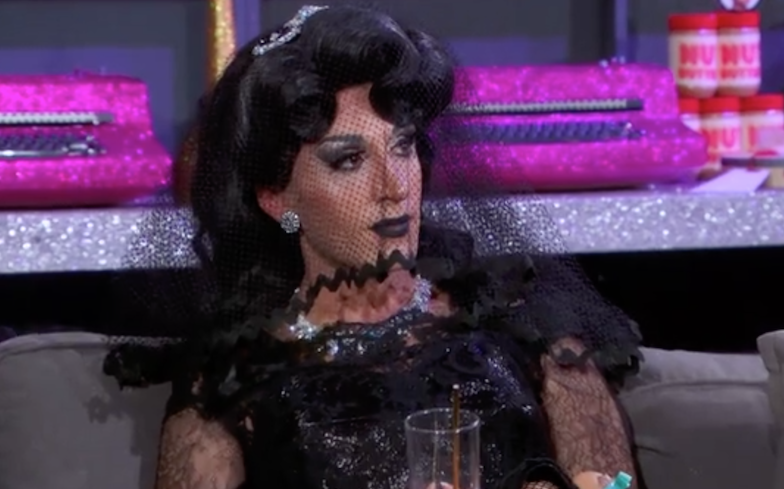 “I am not a quitter. I deserve to be in that top four.”

Jackie Cox has ruffled a few rhinestoned feathers with her prediction for the Drag Race season 12 finale.

Following their critiques on the main stage for their Droop lifestyle brand commercial, the eight remaining contestants reflect on their track records in Untucked and spill the T on who they consider their biggest competition for the crown.

Gigi Goode, who currently stands as this season’s frontrunner with three maxi-challenge wins, piques the question, to which Heidi N Closet hilariously remarks: “You bitch, you done won 12 challenges.”

Sherry Pie – who was disqualified at the start of the season – admits that Jaida Essence Hall is “very stiff competition” while Jaida states: “I would say Sherry and Gigi because they are both so different.”

Jackie then causes controversy when she decides to embrace her inner Mystic Meg and predict who will land a coveted spot in the final four. “Other than myself, it would be Sherry, Gigi and you Miss Jaida,” she says.

Crystal, Heidi and Jan aren’t too pleased with her comment, and really, do you blame them?

“It’s not gonna change my feelings in this competition,” Jan hits back in her confessional. “I can see myself in the top four very clearly, I have such drive and passion for this. I am not a quitter, I deserve to be in that top four.”

The drama quickly takes a backseat after the arrival of this week’s guest judge, the disco legend, Chaka Kahn.

“I’m no different to y’all,” the humble icon admits. “I want to wish you all good luck. It’s tough what you’re doing, I know a little bit of it, because I do a little drag too. I feel like we’re kindred spirits, so I know how hard it is.

“But, it can be very rewarding, because you’re following your calling. That’s what’s important: you follow what you love to do.”

Widow, the biggest Chaka stan of the bunch, then receives some sound advice from her idol about persevering through the tough times: “Negative thoughts and feelings and entities can enter you when you’re at your weakest.

“But you are smarter than they are, and you can whoop it all. Anything negative, you can whoop its ass.” If, like us, you appreciated Chaka’s advice, then head on over to her Apple Music page to stream her discography. Let’s give her some coins!

“I’m having fun in this competition and I don’t want it to end,” she says in her confessional. “If I’m in the bottom two next to Widow, who is the biggest Chaka Kahn fan and an amazing performer, I know she’s going to turn it.”

After battling it out to Chaka’s 1985 classic This Is My Night, Jan is ultimately told to sashay away from the competition. See how fans reacted to the latest controversial elimination here.

Next week, the queens vie for the title of America’s First Drag Queen President as they argue in a presidential debate.