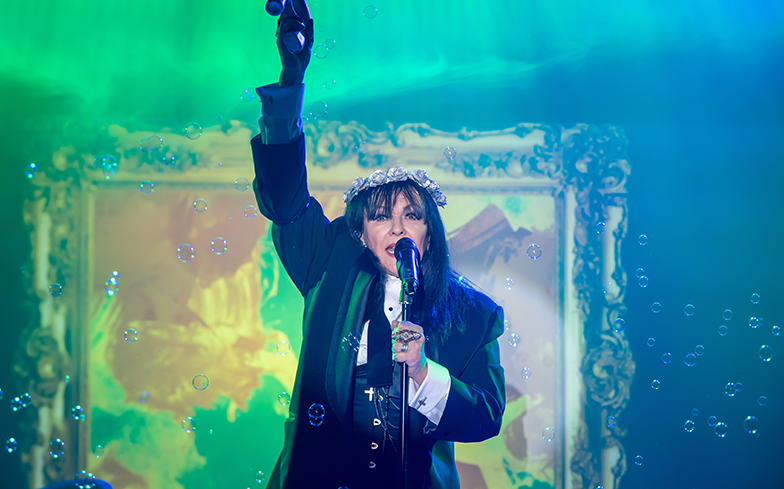 The cabaret-style spin off from musical Closer To Heaven is now playing at the Leicester Square Theatre.

If Musik sounds like a bit of a niche concept, that’s because it is. Writer Jonathan Harvey joined forces with The Pet Shop Boys for the 2001 musical Closer To Heaven, which enjoyed a five month run at London’s Arts Theatre. It featured a narrator called Billie Trix, played by Frances Barber. Now, almost 20 years later, this creative team has reunited; the result is an hour-long cabaret spin off, starring Barber, written by Harvey and featuring original songs by The Pet Shop Boys.

It focuses on the story of Billie Trix, the self-styled icon, rock star, screen goddess and drug addict who has enjoyed a life of excess. It’s an outrageous performance from Frances Barber – coarse, vulgar, confrontational and provocative, but ultimately rather entertaining and endearing. Her anecdotes are sprinkled with celebrity names, from Andy Warhol to The Beatles to Madonna, and are interspersed with six songs. It’s all really rather enjoyable to watch.

While it’s all held together by a strong central performance, the individual component parts are all worth a mention. The script is generally pretty smart and manages to tread a fine line; it could never be described as politically correct but it steers clear of being offensive. The songs – mostly new, but occasionally borrowing from Closer To Heaven – are mighty fine, and while Frances Barber may not be the most technically gifted singer she certainly knows how to deliver them.

We had a really great night at the Leicester Square Theatre with Musik. No, it doesn’t push any boundaries, or challenge in any particular way. But it does what it sets out to do very well indeed – the script is full of wit, the songs are strong and memorable, and Frances Barber delivers it all brilliantly. Sometimes we appreciate seeing a show which just sets out to be a good bit of fun, and in that respect Musik ticks all the right boxes. Absolutely worth checking out.