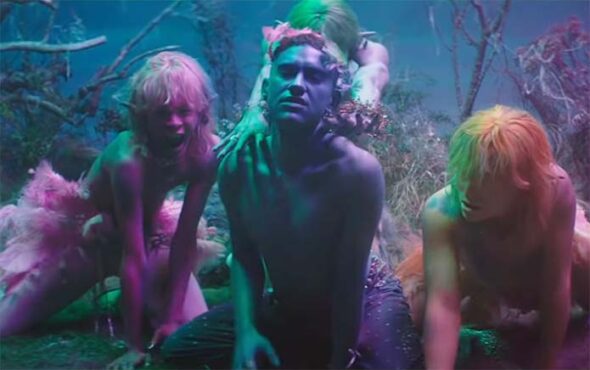 Olly Alexander has released the star-studded music video for Years & Years’ brand new single, Crave, ahead of his new album.

Years & Years are back for what will be Alexander’s first solo project after Mikey Goldsworthy and Emre Türkmen left the band earlier in 2021.

Crave gives fans a fresh glimmer into what is sure to be an album full of fan favourites, with the dance-pop track getting an array of sensual visuals to match its lyrics.

The song’s video, which was released on 28 September, sees the singer star in a trippy fantasy full of snakes, peaches and even bondage.

“You said that you’d do me no harm, now it’s what I want,” Alexander sings on the track.

There are even what appears to be sexy elves and demons, played by none other than It’s A Sin co-stars Omari Douglas, Nathaniel Hall and David Carlisle.

“Thank you to my forest friends Munroe Bergdorf, Omari Douglas, Nathaniel Curtis and David Carlyle for making this an extra special video (and a mini It’s A Sin reunion),” Alexander wrote on Twitter after the video’s release.

He described the song as “​​a playful way of inhabiting the deranged sexual energy I’ve always wanted” which the visuals are inspired by.

“In the past I felt like I’ve been dominated by toxic relationships, and I felt like it would be fun to turn it on its head,” he continued.

“I was writing from a fantastical space, stuck in the same four walls. I wanted to have as much pleasure as possible in the music,” Alexander said of making the record.

Night Call’s release was announced on 28 September, the same day as Crave’s debut.

Writing on Twitter, Alexander said: “NIGHT CALL – my new album is out on the 7th January. Night Call has been my escape for the past couple of years, I’m so excited to share it with you all. Pre-order the album, listen to CRAVE and watch the video, all from 5pm BST TODAY x.”

You can listen to Crave below or by clicking here. Night Call is scheduled for release on 7 January.